I don’t shout out this fact often, but I used to work at an international women’s rights organisation. I can answer most questions you have about women’s human rights, or at least point you in the right direction.

Personal activism is important to me, and I try to implement the lessons I learned during working in NGOs in this blog, in a way that is non-discriminatory to all. I hope that showed through.

If you haven’t noticed, the subject I am most passionate about is financial literacy. In this post I want to invite you to do some personal activism to help the gender that tends to be both overworked and underpaid.

Women, in general, earn less than men, retire/stop working earlier than men, and has a longer retirement period to worry about (longer life expectancy). This post is written for the male reader in mind, but I invite everyone to do their part.

Here are 4 things guys can do for women in their lives.

#1 Talk to her about investing

Women like shopping, amirite? Women also only like fashion, beauty, you know, fluffy stuff. I’ve legit gotten backhanded comments like, ‘wow, you’re good with money, most girls aren’t’. Which is an interesting comment to get, seeing how women are generally better with money.

Would it surprise you to know that women are better investors than men? There are more male investors, sure, and finances are male-dominated anyway, but studies have shown, again and again that women’s tendency to take the less risky approach is the better investment approach.

The next time you hear about an investment opportunity, talk it out to some women. They might have insights that you wouldn’t have gotten from your male friends. It may help you avoid losing money.

On the women’s side, it’s nice to be able to talk about investing. We don’t grow up feeling like we belong in the financial world. Many top management posts are held by men, and we lack good female mentors and role models. So yes, including us in conversations is a nice thing to do.

She will probably say things like, “Oh I’m not good with money!” – women downplay their abilities a lot. We are taught to be modest, to take a back seat while the men take care of stuff. It took me a while to recognise and unlearn this. Ask her anyway.  Ask her these questions:

#2 – Take charge of some chores, and do it well

Let me introduce you to the concept of ‘unpaid care work’.

In the typical household, women spend much more time to do the housework, take care of children, and caring for the elderly. In Malaysia, women do up to 2.4x of unpaid care work compared to men. Source: KRI’s Time to Care: Gender Inequality, Unpaid Care Work and Time Use Survey report. 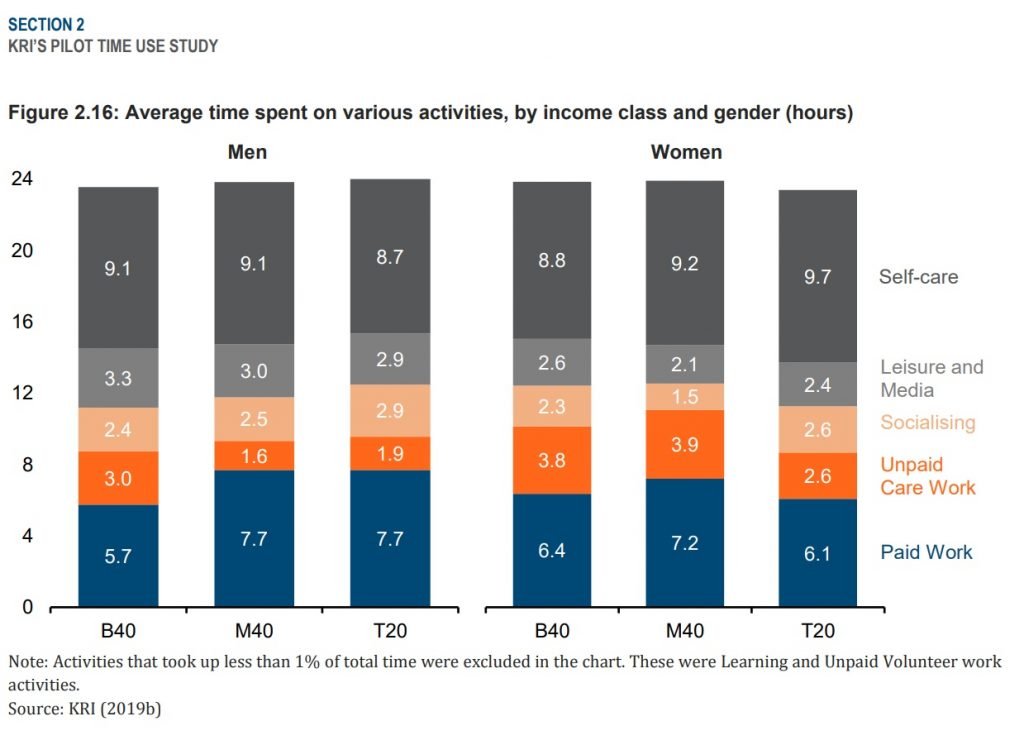 Men do chores, of course they do. However, men tend to need ‘reminding’ (note: this is where the ‘my wife/mother/sister nags’ jokes come in). It is simply faster for us to do it ourselves. It’s worth doing it to worry about one less thing that day, to avoid ‘why’d you bother me this time’ stares by the guys.

For me, it’s the same feeling I got when I had to remind someone they owe me money. It’s just an unpleasant thing to do.

It doesn’t, at least not in a tangible way, but doing this will make you a better, more caring person to your loved ones. This means you will be giving up hours in a week to do those chores instead of her. You need to notice things that need doing and do them.

Chores you can take over:

A good rule of thumb is about 3-4 hours more housework each week.

#3 – Do some positive discrimination

Positive discrimination is a term that simply means ‘temporarily favouring one group over another while we take action to improve the situation for the better’.

Easiest example – the women-only coaches. Some ask the need at all. But consider this: sexual harassment in public places can be enough deterrent for women to go work. It causes unnecessary stress.

So that’s why we have our sexual harassment campaigns, AND also have women-only coaches. We need both until the education and awareness seep into society.

Benefits range from karma points to higher profits in a company to a safer society. Some examples of positive discrimination you can do:

And more. Do some positive discrimination that favour women when you can.

EDIT: An argument against meritocracy – This is for people who’re like, “I make sure to reward people based on their merits not their gender! It’s the only fair thing!”

Meritocracy assumes everyone starts from the same playing field. Reminder: oppressed groups (women, racial minorities, the disabled etc) have more barriers to overcome. People try to implement merit-based systems, sure, but did you know:

These are just two examples, but enough to point out how flawed merit-based systems are. Internal biases still shape our opinions and decisions – and everyone is biased.

Also I don’t like meritocracy because it’s a system that favours the rich to get richer.

#4 – Take the punches as they come

Men who actively do things to support the women in their lives have some nasty nicknames, don’t they? Whipped by wife/girlfriend, ‘domesticated’, they say.

It takes a brave soul to dare to do all the things above. Comments, snides, snickers, maybe even a blatant ‘you’re not a man if you do X, that’s her job’. Gender stereotypes don’t go away overnight, but the good thing is every act of personal activism counts.

People who react negatively to your positive acts for women do so because they feel defensive. To them, things should work a certain way, so their beliefs and values are being challenged. The comments may come from men or women too.

It’s not your job to change them. It’s your job to just lead by example. At least now you’ll know people’s characters better.

I was inspired to write this post as a tribute to International Women’s Day. I was blessed to be born in Malaysia, where working women is a norm (or a need, looking at this economic situation – dual income households helps a lot with money).

I have a mother who holds top management post in the education sector. I have a father who prioritised my education. I had a car, loaned from the family, that allowed me to safely go to work since 18. I enjoy the benefits of being Bumi, by virtue of simply being born to Malay parents.

But not everyone has the same background – I am who I am thanks to these privileges.

Will you help me to help women, especially the worst-off, in addition to other disadvantaged minority groups?

Would love to get some pledges. Thank you in advance. Love from Suraya, your friendly neighbourhood feminist.

High number of unemployed graduates, especially Malay graduates are not news in this country. We hear them blaming everything…

In this day and age, it’s pretty hard to avoid being in any kind of  debt (hutang). This is…

In this post, I broke down how I spent my RM3500 salary while living in the heart of Kuala…

Let’s face it: Malaysia is NOT a good place for LGBT individuals to freely express themselves. But no one…

Disclaimer: I received a test unit for the purpose of this review. The unit will be returned. All the…

3 Ways to Get A High Salary in Malaysia891 Total Shares

3 Investments Where I Lost All of My Money838 Total Shares

19 Financial Education Initiatives in Malaysia You Should Know695 Total Shares

10 Ways to Retire, From Awesome to Depressing660 Total Shares