Before I begin this,

Guys, I made SurayaCoin! 1000 of them! And it’s super simple via the Waves Platform – literally just 4 steps! [EDIT 2021: Waves Platform is no longer operational – such is the lifespan of crypto projects 🙂 Anyway the point is, making cryptocurrencies is not a hard process so think twice before being sucked into a token just because its ‘crypto’] 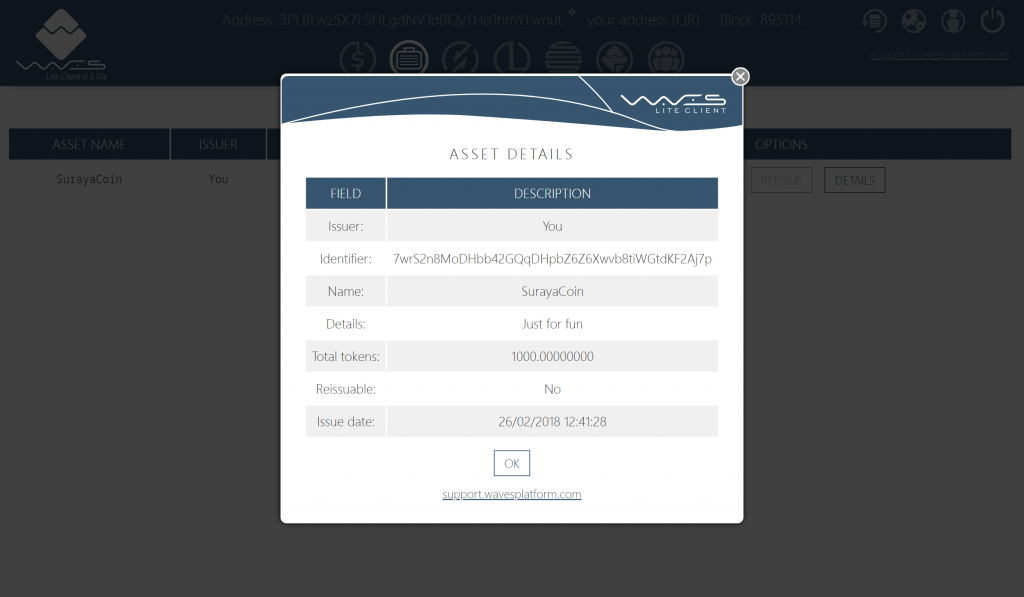 Step 1: Create a wallet at WavesWallet.io

Super simple. Go to the address above, type in your email, write down your seed and keep it somewhere safe. The bunch of words like pumpkin lemon ceiling horse – those words collectively is called a seed. You need the seed to recover your account, in case you lose your password. 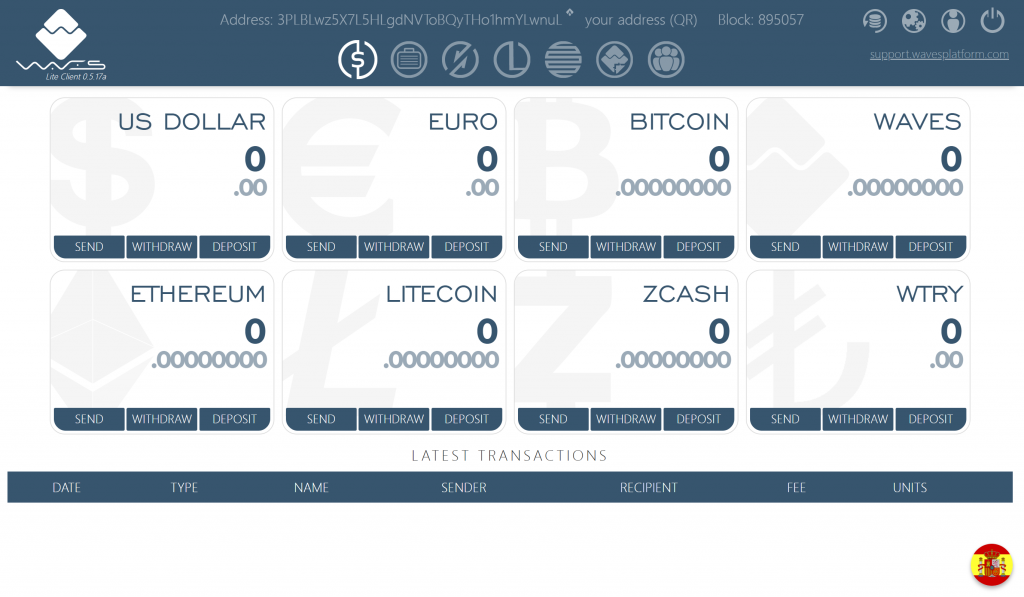 You need 1 Waves to create your own cryptocurrency via the Waves Platform. At writing time, 1 Waves is $6ish. I decided to convert the nice round number of 0.001 bitcoin into the not-so-round number 1.18588263 Waves. So essentially, this project costs me less than RM40, including the bitcoin network fee. That’s really cheap.

There are a few platforms where you can exchange bitcoin into Waves. Personally, I used Changelly (note: referral link) – it took around 20 minutes to arrive. For more places to get Waves, check the Exchanges section at r/WavesPlatform. 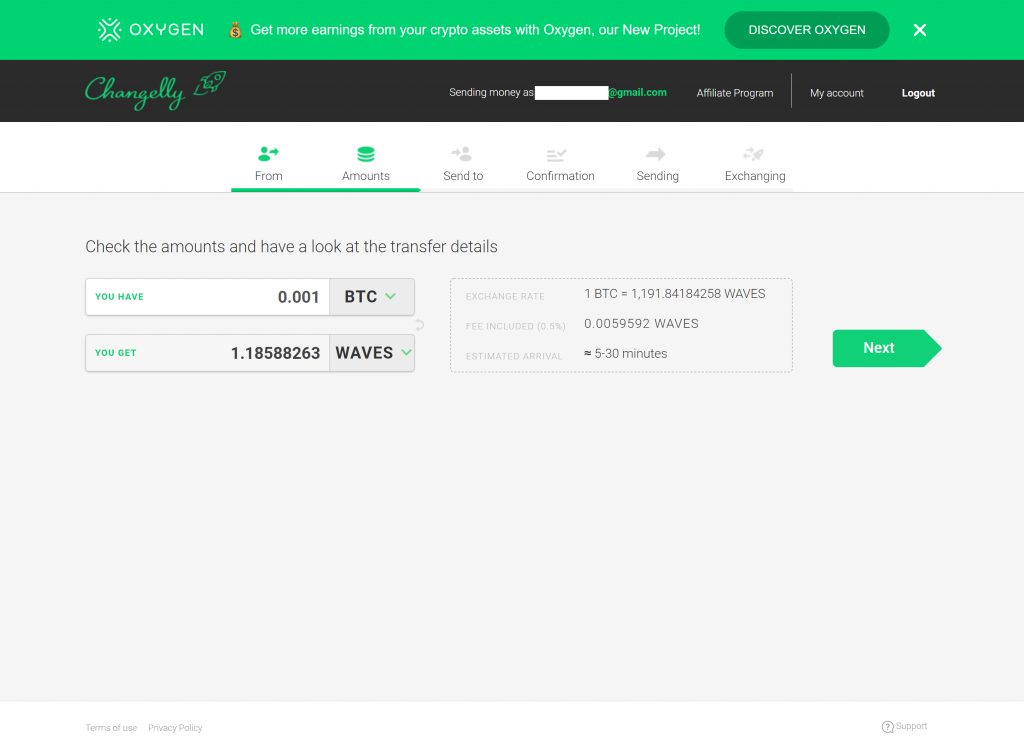 After you have at least 1 Waves in your wallet, you can now make your own cryptocurrency slash token. Select the Token Creation Lab button. 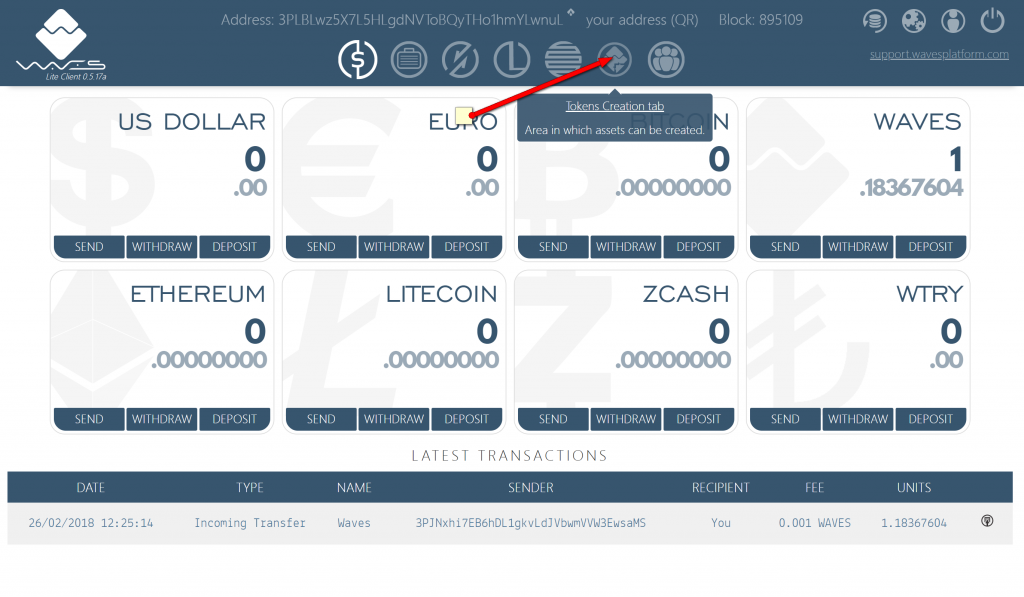 Give your token a name, add a description, decide on total tokens issued and its decimal points. Make one token, make a billion tokens, whatever. It’s the same price – 1 Waves. 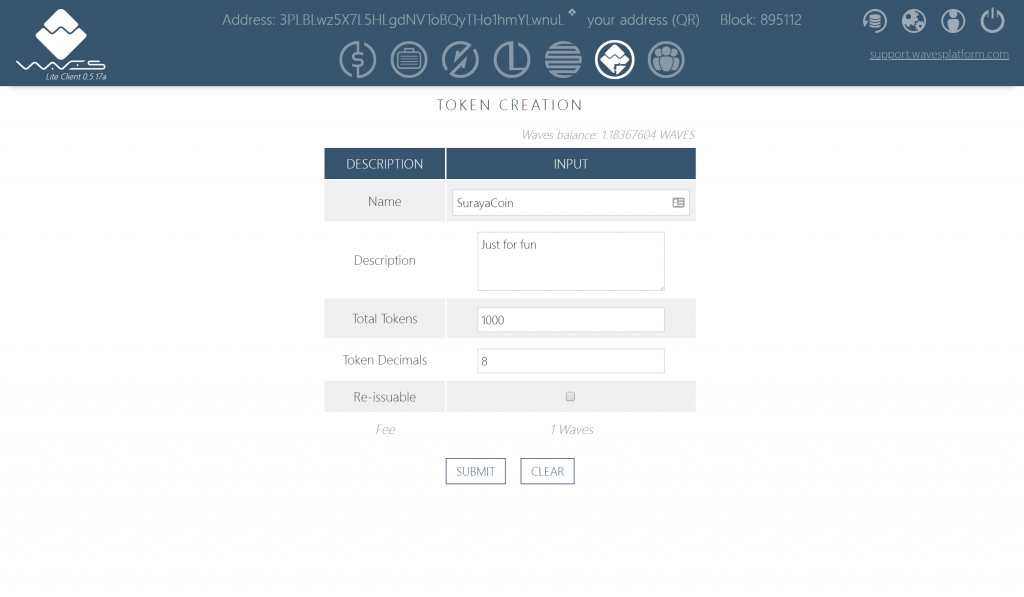 You can make your tokens re-issuable or non re-issuable. If not re-issuable, then your cryptocurrency will permanently have that same amount in circulation. 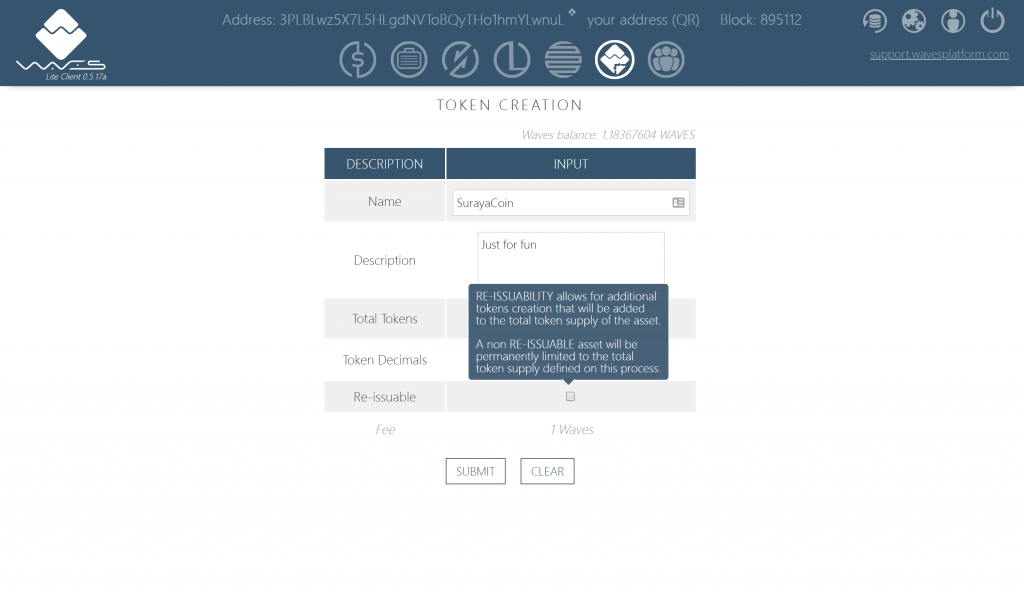 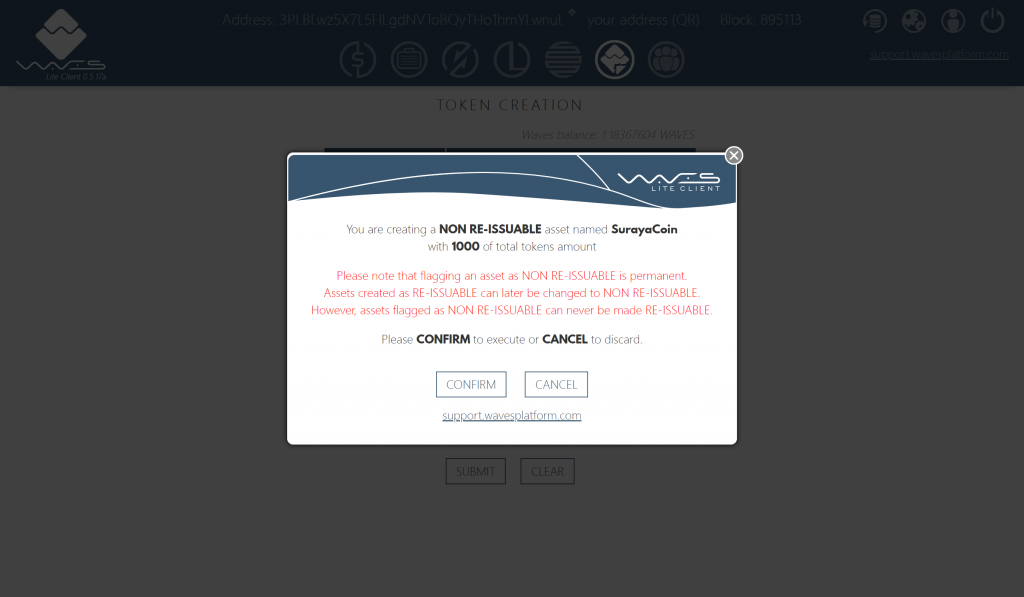 That’s it! You’ll get a notification that your tokens were created. Your wallet will have one less Waves in it.

View your freshly-made cryptocurrency in the Portfolio section. 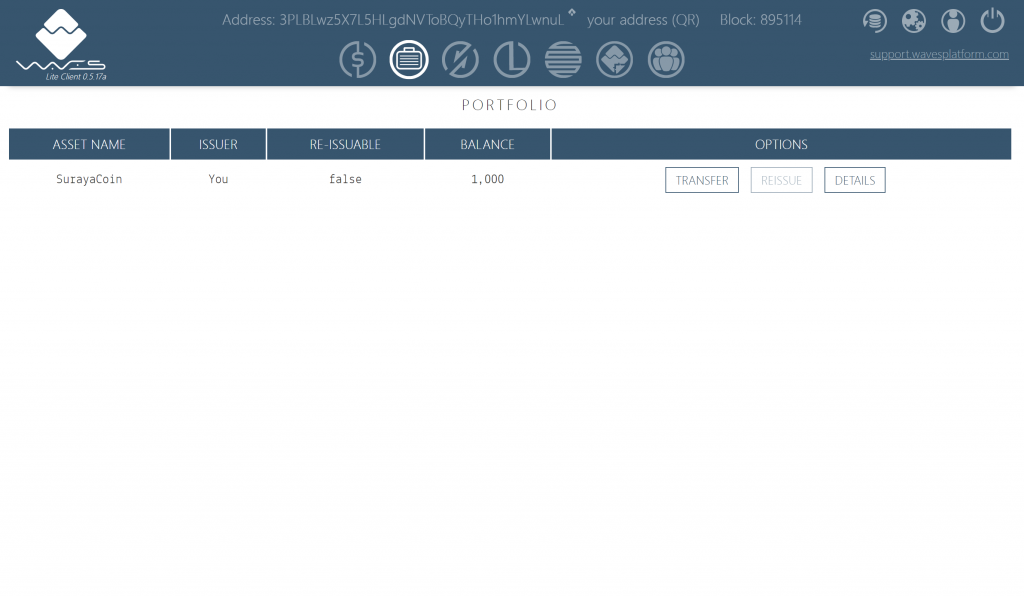 EDIT: The next day after I made SurayaCoin, I found that people have been sending Waves-based tokens to my address. I didn’t request, they just arrived. Cool. I didn’t know you can earn passive airdrops this way. One of them is a payments token and another one is an ICO. 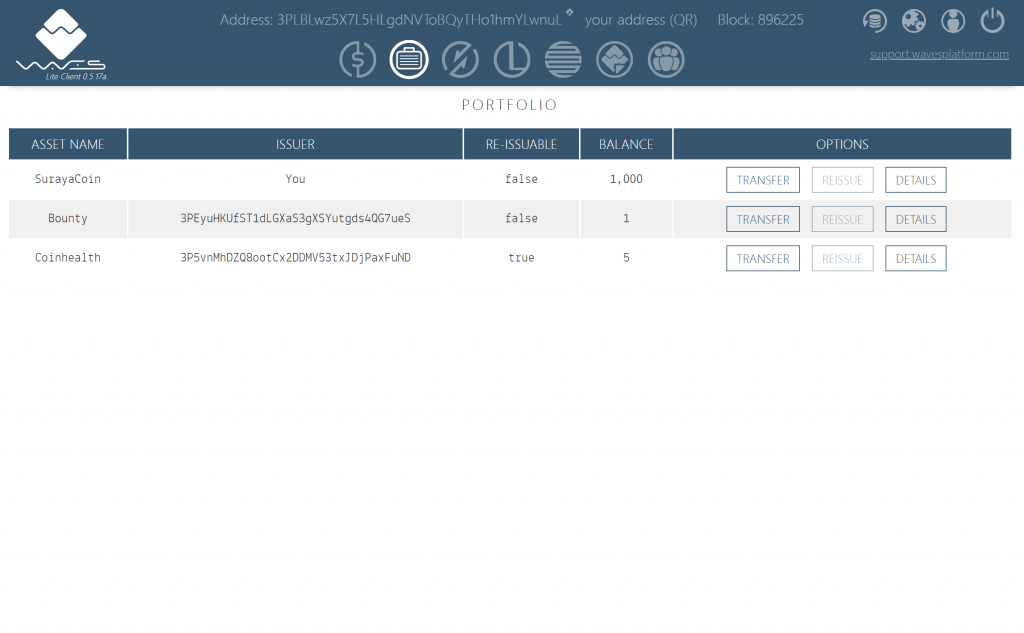 What I said in the above shoutout to BNM is worth repeating here. SurayaCoin has absolutely no value whatsoever. I did it for the kicks, that’s it. Now that I’m done creating it, they’ll probably lay forgotten in my wallet (I’m too lazy to even make a coin design for it).

This point is important to stress, because the idea of having a value-less cryptocurrency is something that many people find hard to grasp, especially crypto-people. Isn’t the point of having cryptocurrency is to let the price appreciate in value, so you can re-sell it for higher amounts?

Naaaaah. For me, this experience is more educational. I wanted to try out a platform that promises token issuance. That’s what it promised, that’s what it delivered. I can technically say ‘I created my own cryptocurrency’ now. Which is pretty cool considering I have almost no technical or coding knowledge whatsoever.

Now that you know how easy it is to create your own cryptocurrency, I hope it’ll make you more sceptical of them as an ‘investment’. Literally anyone can create one and slap some fancy words on it (blockchain! decentralised!) and tell you its valuable, so gimme your money.

So if not for ‘investment’, what are blockchain-based token creation good for? Let’s see..

P/s – if you’d like a couple of those value-less SurayaCoin, put your Waves wallet address in the comments section. If you have Waves-based tokens to give away (not sell!), let the rest of us know by commenting as well. We can start a crypto-coin collecting group. Like collect Pokemon like that.

My Waves address is 3PLBLwz5X7L5HLgdNVToBQyTHo1hmYLwnuL

Support a content creator, share this article :)In the Amanah Saham: 4 Advanced Strategies You Should Know article, I…

Support a content creator, share this article :)I love that more people are talking about their monthly budgets! One…

Support a content creator, share this article 🙂 Since my early 20s, I keep a little gold as part…

Support a content creator, share this article :)I’m a big fan of halal investing. I love the underlying values…

Support a content creator, share this article :)Looking to invest in PRS in Malaysia, so you can have a…

Support a content creator, share this article :)The best investments in Malaysia are INVESTMENTS IN YOURSELF. Invest in your…