If all of us were a Homo Economicus, we’d never make a single financial mistake. Not one. The ‘Economic man’ is an infinitely rational human being, who makes decisions purely on the pros and cons of options provided.

But alas, we’re not. We’re Homo sapiens, humans. Hormones released in our brains affect our emotions and decide on our behaviour, almost all the time. Being aware of it helps, but not as much as we’d like to think.

What I’m saying is, everyone makes stupid financial decisions. And sometimes we do it even when we know the decision is objectively stupid.

It’s like… being aware that binge-eating is not good for you as you’re stuffing your face (hello dis me). Or continuing an extra-marital affair despite knowing your life will fall apart when you’re caught cheating.

Oof that got dark. Anyway, going back to personal finance.

The point I’m trying to make is when you make stupid financial decisions, know that you’re not the only one.

I’ve made them. So have many others. Sometimes things can be bad, but some of them, we end up not regretting, either through acceptance (reframe it as a learning opportunity) or through sheer luck (omg it ended well, thank God).

As proof that we’ve all been done boo-boos in varying degrees and situations, I’m listing below mistakes that I and RoR audience have made. Go through our answers below, republished with permission (thank you!).  Answers were edited for clarity. 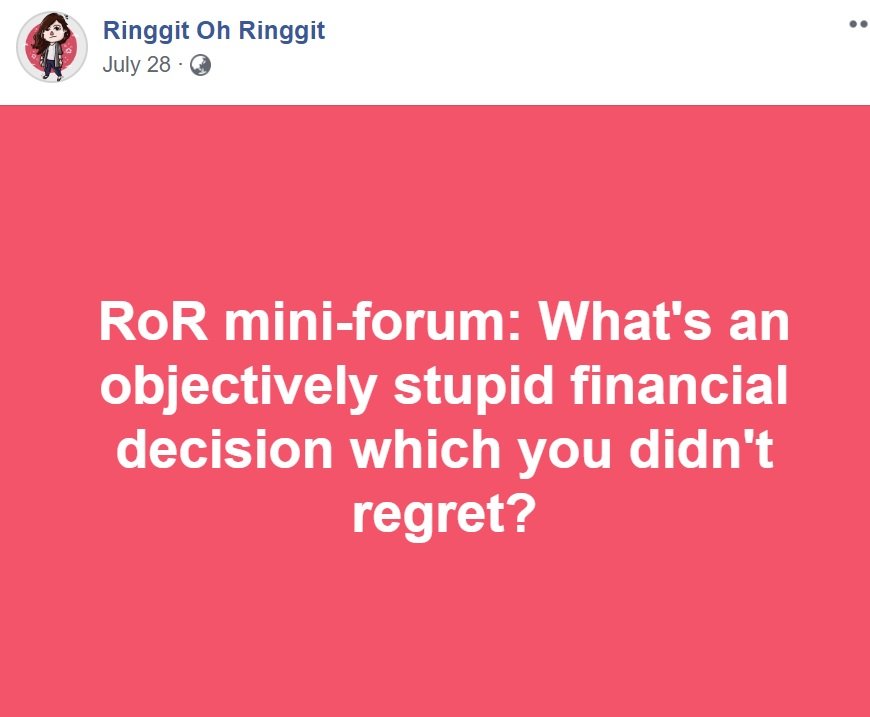 Travelled instead of saving

Chui Yee Mun – I took gap months to volunteer abroad/out-of-state instead of jumping into the workforce right after graduation.

In terms of long-term saving, the decision hurt my financial goal (especially retirement goal) but I believe that you only live once. (Ultimately) what matters to me is how vibrant my life experience is.

Well, I guess it’s pretty millennial thing. And although it hurts me even more now, when many are affected by MCO, I have no regrets since I myself made the decision.

Patricia Angela Pinto – It was my first overseas trip without my parents, ever.

I was afraid of under-budgeting, and despite some hangups with credit cards as my dad had gone bankrupt from credit card debt many years before, my worry for running out of cash led me to apply for one before the trip. I also withdrew a large sum from my ASB, for hotel bookings etc.

Objectively it was dumb to do that, but I don’t regret it because that trip made me much more aware of how I treat people, and I gained new self-found confidence in travelling on my own, to the point that I feel I can confidently navigate airports and public transport in a different country, as long as I can get data.

Withdrawing from ASB was really dumb though, in retrospect.

Rupa Subramaniam – Instead of buying myself a degree like everyone else, I spent my education savings to backpack for 6 months around the world. I did my ‘lawatan sambil belajar’ to some of the best art museums in Europe, and observed Brazilian culture too.

I came back with a fresh pair of eyes. I was able to see the gap in our Malaysian art industry and produce work at an international level, to cater for it.

The ideas I came across while travelling has already made back my financial investment. Best part? It got me street cred. I wouldn’t have gotten the experience and credibility with a mere art degree.

Travelling gave me the confidence, no matter what shit happens, I can deal with it. Still don’t have a degree, still can’t apply for scholarships (yet), but boy have I lived to see the world in its glory!

Patrick Ling – I put all my life-savings into one stock, Westmont Ondustries, and mercilessly, it tanked. And I heard my money talked to me for the first time. It said goodbye!!

Thankfully, it happened at the start of my investing journey many many years ago. I have moved on. I benefitted from this lesson tremendously, especially the importance of diversification.

Suyin Invests – I used my entire allocated savings for investments to buy shares in one single company. (This was a stupid decision because) portfolio allocation really matters. Don’t just have one company as our entire stock portfolio 😅

Luckily it went up by 50% in 4 months. If it went down by 50% instead, maybe psychologically I would not be ready to take that kind of volatility and might have sold it all and realised the losses.

That (losing money) could have shaped the beginning of my investing journey. I would have emerged with a completely different outlook

Suraya (me lol) –  …I have borrowed money (advance from credit card) to purchase crypto. This was roughly 5 years ago when I was young and stupid

DON’T DO THIS. IT’S A BAD MOVE. THANK GOODNESS IT WORKED OUT

Hasyimi Bahrudin – We bought an undercon apartment on the spot. We were checking out properties to buy for our first home, and decided to buy this particular unit without thinking it over, mostly because it’s cheap (RM250k for 1000sqft). This was back in 2016 when I was financially illiterate.

It worked out okay, as the location turns out to be near a KTM station; otherwise I have to drive 50km to get to KL. I do have some regrets though. Maybe we should have stuck with renting, at least for another few years.

Syaza Nazura – (My objectively stupid financial decision was to) move out of my parents’ house into our rented apartment just one month into a new job, in February 2020.

I got tired of driving from Shah Alam to Seri Kembangan on a daily basis (have to leave the house by 6:30 to get to work by 7:30am) so decided to check out a few places near my workplace, found a nice furnished studio, took it up and rented it.

Two weeks after we moved in, MCO started. I’ve been working from home for the past four months, when the only reason I moved out here is to be closer to work 🤦🏻‍♀️

Could’ve saved A LOT if I had waited just another month, on rent and bills and internet and all. But that’s OK. (The upside is) I get to live independently with the husband, away from family. 😂

Ahmad Helmi Shaharuddin – In 2012 I took out personal financing worth RM40k (to pay for) my wedding as I did not set aside any savings for it.

To be honest, before marriage I had no financial planning whatsoever, plus we had met and known each other for only a few months before seriously considering to marry each other hahaha.

Luckily we were not big spenders for our wedding. We only used RM20k from the amount for the hantaran and wedding reception, and planned to use the rest to rent a place and buy basic stuff for our home.

But we (ended up using the money to) purchase a sub-sale, 1000-sqt 3-bedrooms 2-bathrooms condo which only costs RM900 per month in mortgage plus another RM150 in maintenance fees, as compared to other ‘decent’ rental property in Shah Alam and Klang, which was around RM1,500 to RM2,000 per month.

Our decision turned out fine as our place is near to work and it is very convenient. You don’t have to fight for parking and the place is so quiet and peaceful. It was partially furnished and newly renovated with kitchen cabinets etc, the only thing we needed was a tv and a bed. And now the LRT3 station is being built near it.

(The house is) an impulsive buy that I didn’t regret. But yeah, do save for your weddings kids.

Jason Chew – I bought a RM600 pair of shoes when my income in that month was by far my lowest. My income improved in the next few months; but that pair of shoes gave me so much comfort during those challenging months.

Dr Amalina Osman –  I made an impulsive purchase of Kindle during a book fair for nearly RM1k.

It turns up to be one of my valuable purchases as it helps me to get good books at almost half of paperback price. Some fiction ebooks are priced only 0.99 – 3.99 USD in Kindle. Such a good bargain I would say.

Melisa Chin – I quit my day job and started an online business. Now, I have flexibility in terms of time, but still have a really hard time explaining to my mom why I did it. No regret though.

Nadia Ahmad –  I agreed to buy my first car back in 2004, for work. After a couple of years owning it, I realised that having a car makes you independent but you have to pour money to maintain it.

At one point, (I regretted the decision so much that) I wanted to sell the car altogether and move around by public transport.

However, (it ended up being okay as) wherever I work, I needed my own transportation (had to stay back a lot back then). The car proved to be a lasting piece of machine too, still working until today. In fact, I m not selling the car ever. So no more regrets.

Fahmi – I joined an MLM due to peer pressure and immaturity and lost a lot of money that I couldn’t make back. But I didn’t regret joining as I learned a lot from the people there, both good and bad.

What can you learn from all these self-admitted stupid financial decisions?

(1) People take risks. You can reduce risk by having savings and learn from other people’s experience and advice and whatnot, but you can’t eliminate it totally. Because, again, we’re Homo sapiens not Homo economicus.

That said, we owe it to ourselves to improve this obvious human flaw via constantly learning and applying self-development.

(2) If it ended up okay, count your blessings. If it didn’t, shit happens, face the consequences and make the best of it, because that’s really all you can do.

As a last note: No matter how bad it is, remember that money is just money – it isn’t worth dying over or anything like that. The world doesn’t end, life goes on.

If you do a stupid financial decision, just do your best to dig yourself out of financial holes as and when you make ’em. With the right mindset, life can still be awesome.

And now, I’d like to invite you to share your own stupid financial decision. I don’t know about the rest of the respondents, but taking that off my chest felt good. Go on, give us your worse.

Support a content creator, share this article :)Throughout your life, you will make hundreds if not thousands of major…

Support a content creator, share this article :)There are many things I love about Islam. But the default faraid…

Support a content creator, share this article :)Heard about Hibah Takaful and how useful it is for yourself and…

Support a content creator, share this article :)You already know that Islam allows a Muslim man to take up…

Support a content creator, share this article 🙂 I track my spending. All of it. In an app. Each…