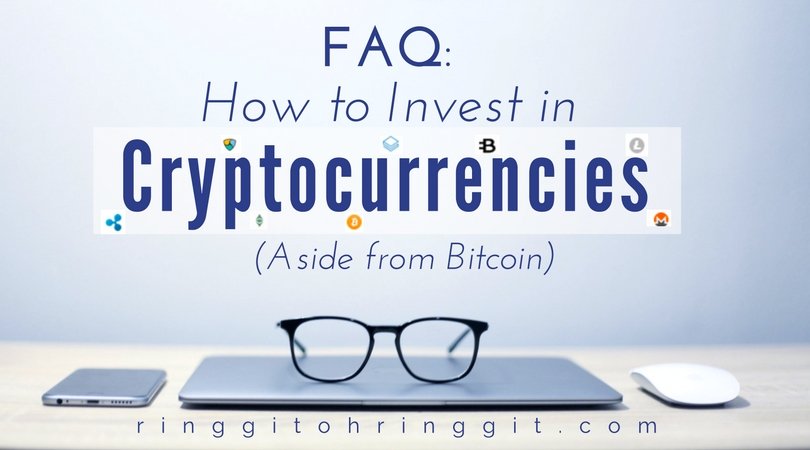 This is a follow-up to my Bitcoin FAQ article. You need to understand bitcoin first before diving into other types of cryptocurrencies. If you have not read that, you might find this confusing, so read that first.

This article looks at cryptocurrency and altcoins from a more ‘investor’, rather than ‘tech’ point of view. If any info here is wrong or outdated, please let me know by commenting.

What is the difference between cryptocurrency and altcoins?

Altcoins – short for ‘alternative coins’. An umbrella term that generally refers to any digital currencies that is NOT bitcoin. Altcoins are not just ‘currency’, they may have wider applications.

What should I know about cryptocurrencies before I get them?

You should know that..

A – They are diverse.

This guide very helpful in explaining the description, pros and cons of some popular cryptocurrencies. The ones I mentioned above are some names you should know and be familiar with.

B – They are way riskier than bitcoin

Why? Bitcoin benefits from the ideology behind it – it was inspired after the 2008 financial collapse caused by financial institutions (recommended movie to watch: The Big Short (2015). It has ‘for the greater good’ connotation; the person/group who created it remains anonymous to this day. For better or for worse, bitcoin politics and governance is messy as no one entity can claim they ‘own’ it.

Altcoins, in contrast, are mostly created by private companies and institutions. There are now self-interest involved, whether it’s for financial gain and/or to push a particular agenda/technology. Also, words like ‘blockchain’ and ‘cryptocurrency’ doesn’t mean anything if the implementation is shit. Therefore, I would say that any particular altcoin is only as good as the team behind it, just like any other startup. And you know the high failure rate of startups.

C – The altcoins world is full of rumors, speculations and pump-and-dumps

I’ll be honest – I think many altcoins rise in value because people get rich via bitcoin and they seek to diversify to other cryptocurrencies, sometimes without a strong enough reason. There is a lot of herd mentality, even more than bitcoin (which at least is affected by world events). I’ve seen crazy rise and fall in value on day-to-day basis. Once, this one altcoin’s value reduced by 70+% in one day.

Altcoins tend to rise in value when bitcoins rise in value, but this observation is not consistent enough to be fool-proof.

D – New altcoins are created all the time

And sometimes they are offered early to investors, even though the tech startup behind it have not done much work on it beyond a website and a white paper (a document that explains the technology they’re working on, the potential and how it can be used). This is called ICOs – Initial Coin Offerings – and many times you can only buy them with Ether. ICOs can get millions of dollars in funding in hours, sometimes even seconds, but my opinion is some ICOs are a hype. I don’t think that putting your money in a buzzword is a healthy way to invest. Sometimes it’s literally, “Hey guys, we’re doing X, we need to raise X million through ICO, the sale is open from [date] to [date]. No we don’t have a working prototype, that’s what the money is for. Kthanks”.

Without actual work put into it, it’s a bit too close to gambling for my taste, but hey.

That said there are worthwhile ICOs to invest in. Do you due diligence. You’re investing in the startup.

To buy other types of altcoins,  The next section will cover the ‘how to buy’.

If you want to buy bitcoin in Malaysia, here are some options:

How to buy from big exchangers (the ones that don’t accept RM)?

This is as simplified as I can make it: 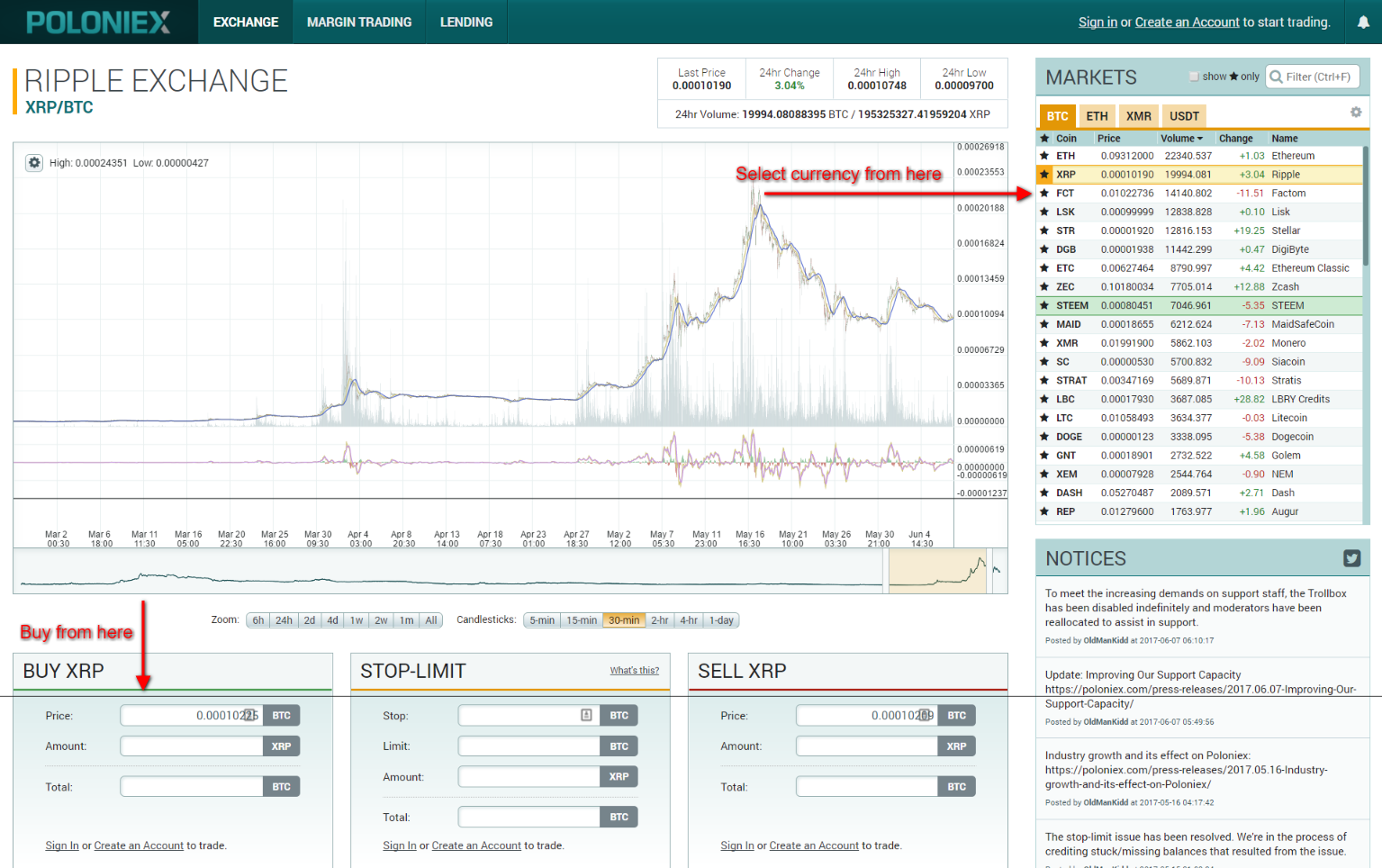 What should I know about buying cryptocurrencies, especially altcoins?

I’m not going to repeat what I’ve said in the Bitcoin FAQ article,  so again please read that if you haven’t.

Specific to altcoins, you should know that:

Which altcoins should I buy?

The one that you think has the potential to grow in value. Seriously, treat them like a startup and find out (1) the team behind it, (2) the strength of their working product (not just white paper), and (3) their growth plan.

A good way to find out if the altcoin is good and worth buying is if the community works on the tech development side of it rather than just talk about the investment potential side of it. Too many times you just hear about the latter.

Where can I find more information on altcoins?

If you are a swing trader, then look for people who give altcoin commentaries based on technical analysis. Look for Peter Sin and Fatih87SK on Twitter, among others.

For general discussions on cryptocurrencies, the Cryptocurrency Collectors Club on Facebook is great, as well as r/cryptocurrency and related subs on Reddit. Just mind the groupthink mentality there – negative (read: realist) sentiment on popular cryptocurrencies get downvoted or bashed a lot. We also have some discussions about altcoins in the Bitcoin Malaysia #1 Group (Open) Facebook page.

There are specific altcoin advocates for some currencies here in Malaysia. This section will be updated once they give me the OK to post their contact.

Which cryptocurrencies are popular?

It depends on which timeframe you look at. Bitcoin is the most popular and will probably continue to be the No 1 cryptocurrency for now. The rest of the altcoins compete for No 2 onwards. Nowadays, Ethereum is almost always No 2, except for that one time Ripple took over briefly.

Some altcoins have serious staying power, while the rest maybe will appear at the top of CoinMarketCap‘s or CoinGecko’s list for a short time before overtaken by other altcoins a few days or weeks later. As of time of writing (6 June 2017, see screenshot image from CoinMarketCap), the top 10 cryptocurrencies sorted by their market cap are:

But in the last 1.5 years of watching the market, altcoins such as Dogecoin, MaidSafeCoin, Lisk, Storj and Stella Lumens have all made appearances in the top 10. I have no doubt that the top 10 list will change again and again. 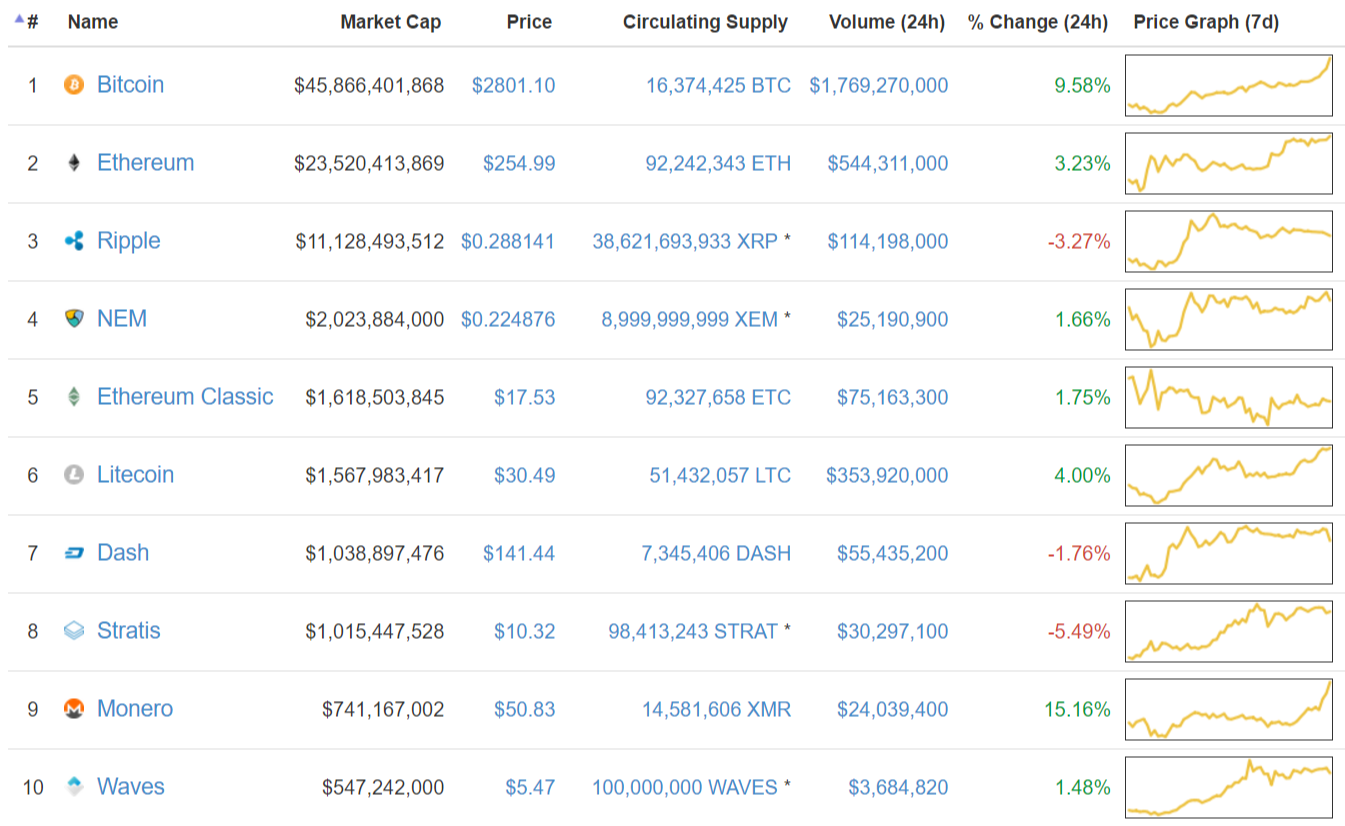 Why are there two Ethereums? What is the difference?

The short answer is Ethereum Foundation decided to implement something called a ‘hard fork’ to solve a community problem. Basically last time there was this thing called the DAO (decentralised autonomous organisation) and it collected a bunch of money and someone ‘hacked’ it (depends on who you ask) and gave themselves a significant portion of that money.

So Ethereum split into two: Ethereum and Ethereum Classic. They are two sets of data ledgers with the same ancestry – one version returned to the point where the hacking never happened while the other version continued on.

The long answer is fun to read if you like drama. It involves high-level smart contract hacking, ethics and rare usage of blockchain rollback. Read here and here.

On the actual difference between Ethereum and Ethereum Classic? Not much, it’s more ideological* than anything. They’re both tradable. From an investor POV, both has potential.

*Why I say it’s ideological: People who choose Ethereum over Ethereum Classic believes that the hacking is unethical and the funds from DAO were stolen, thus it should be returned. The people who choose Ethereum Classic over Ethereum believes that the hacker fairly exploited the smart contract feature in the DAO through his/her/their own cleverness, thus that makes it rightfully theirs.

Can I mine altcoins?

First of all, different altcoins use different terminologies. Some use ‘mining’, some use ‘harvesting’, some use other terms. But for all intents and purposes, let’s just use mining for now to refer to all the ways to earn altcoins without buying them.

The short answer is yes you can mine some altcoins. I don’t mine and I can’t cover ALL altcoins here, so please get specific details from their respective communities. There are some altcoins that you can still mine with simple equipment. Just be wary of dodgy cloud mining or anything with MLM or Ponzi structure.

There are some discussions about mining in Bitcoin Malaysia #1 Group (Open) Facebook page.

Are gains from cryptocurrencies taxable in Malaysia?

I personally calculate my gains using Zakat Emas calculation. No idea if this is the right approach, but trading is a zero-sum game – if I win, somebody else loses. I want my karma to be cleaner a bit.

Can I spend ether and other altcoins in Malaysia?

If you want an easier way to spend it, I suggest getting a crypto debit card. Use this referral link to get 25% off plastic Wirex cards.

EDIT: Due to a Visa ruling that affects ALL bitcoin debit cards worldwide, card orders are temporarily unavailable to non-European customers.

Super high risk type of investment, but super high rewards as well. Take at least a few weeks to read what you can, join the communities (try to recognise the herd mentality), and make your selection based on the cryptocurrencies’ tech potential. A LOT of people have lost A LOT of money overnight because it’s very easy to get greedy. Do not invest more than what you can afford to lose.

Any specific questions about investing in cryptocurrencies in Malaysia not covered above? Comment and I’ll get back to you. This article will be continually updated with new info. 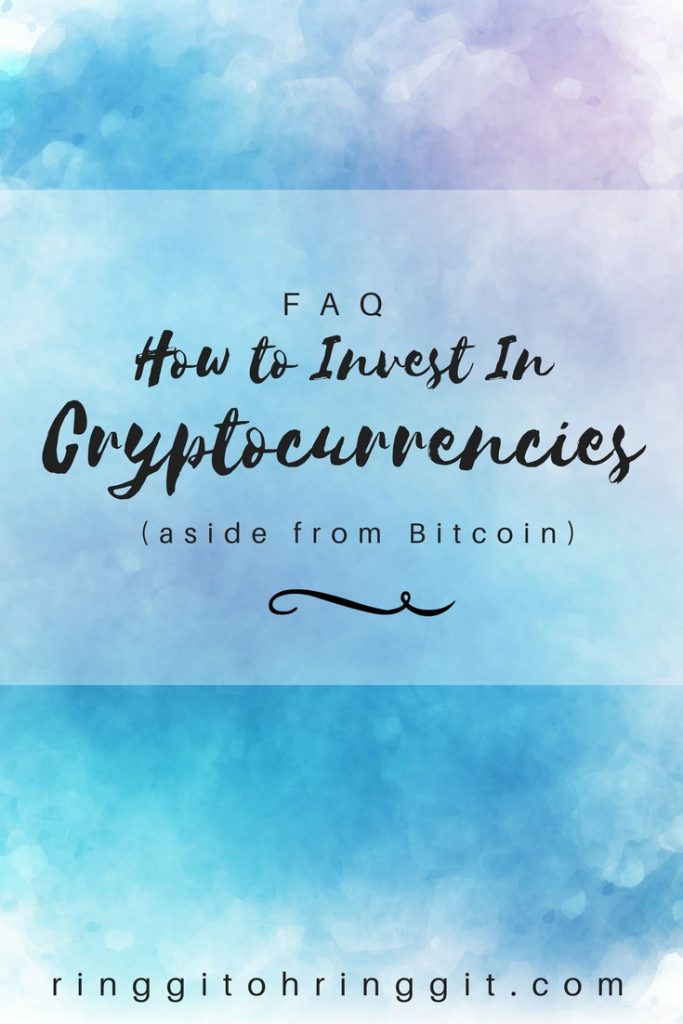 I’d like to introduce to you one of my favourite books in the world, New Aging: Live smarter now to…

Real talk: there’s a special place in hell for people who finds satisfaction in getting the Lowest Possible Price…

Sometimes, buying a laptop is like buying insurance. When you mention that you’re looking for one and ask for…

Restricted Movement Order just started, but I admit I’m already restless. But… I refuse to complain about it. Whatever…

You know you gotta invest. That’s how you can achieve financial freedom. But dude, there’s way, WAY too many…