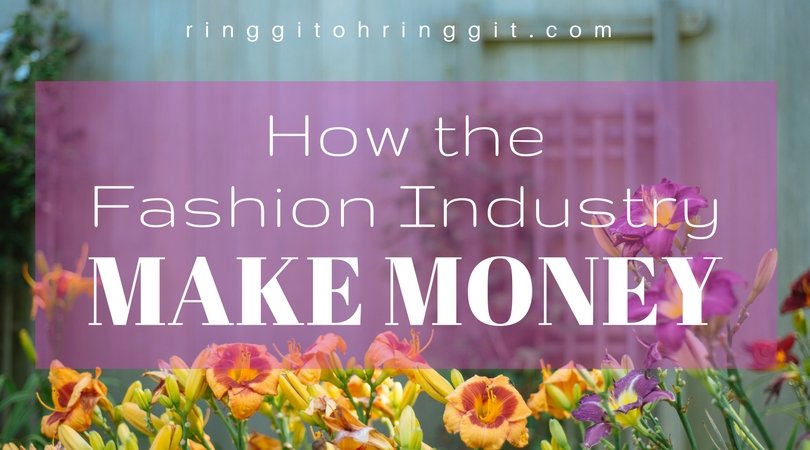 Since my post on saving money on fashion, I am on a fashion roll. I’m actively trying to dress better – this does not mean choosing exclusively branded clothes and accessories, this means paying more attention to quality fabric, good stitching and well-cut, well-fit clothing items.

I even read about them, to find out more about how the fashion industry makes money. Read on.

Fashion Babylon by Imogen-Edwards-Jones and Anonymous is a book I picked up during Big Bad Wolf Book Sale for RM8. It’s about the world of high-fashion, specifically in London (but includes New York/Milan/Paris anecdotes).

‘Anonymous’ is the collective of people who work in the fashion industry (models, stylists, seamstresses, fashion influencers, makeup artists, photographers etc), and let me tell you, this book was juicy. I highly recommend it if you follow any fashion at all.

But what made the book interesting to me were the insider knowledge on how the fashion industry makes money. Here’s what I find out.

It’s all about mark-ups

The designer might spend $30 to produce one piece of clothing. They’ll sell it via their shop for $100, but once they have a deal with a department store, they in turn will mark it up further. The book said the typical mark-up rate for UK is 2.9x (they’ll sell the same clothing for $290) and for US is 3.1x (they’ll sell for $310).

Makes me wonder how much Parkson, AEON, Zalora and the rest marks up their wares :/

Also, a company can sew one last button in their country and claim its ‘Made in Country X’. Most clothes and fabric come from developing countries due to cheap manufacturing costs.

Accessories, perfume and cosmetics are the actual money-makers

They are fairly cheap to make, but can fetch high prices due to branding. They tend to be small so stocking them isn’t usually an issue.

In one of the examples in the book, the main character planned to sell an accessory bought for just $2 for $25 on wholesale, which will sell for $75 to the customer. Some items (notably handbags) are artificially kept in short supply and have ‘waiting lists’ to keep the illusion of exclusivity and scarcity.

So same idea behind diamonds. Not technically rare, but just marketed as such.

Perfumes are particularly cheap to make. Apparently they cost less than $1 to make, including the box. But they sell for absurd prices like $100.

Designers rely a lot on celebrities as fashion influencers

Not surprising, but I didn’t know the extent of it!

Apparently, designers fight for certain celebrities to wear their stuff to award shoes, red carpets, and other PR opportunities. Tonnes of free stuff are sent to them in the hopes of getting some of the items photographed by paparazzis. Some celebs are already known for certain brands, so they only let those designers dress them.

Lesser-known designers get their ‘lucky breaks’ when the celebrities they dress win awards or get high level of attention in the press. They’ll see their sales increase after those events.

Designers also have to do a lot of damage control when C or D-list celebrities wear their clothes. They don’t like it when their brands are ‘tainted’ by those celebrities – sales go down as the public avoid their brands due to those association. I’m reminded of that time when Abercrombie publicly asked the Jersey Shore cast to stop wearing their stuff haha.

What happens to leftover clothes that don’t sell?

If that doesn’t work, then they’ll sell it to stores like TJ Maxx at cost price (probably Reject Shop / FOS for us?)

If that still doesn’t work, they’ll destroy the clothing. They do this instead of donating just to protect the brand image.

I kinda get why they do this, but I’m still annoyed over this fact. So many people can benefit from those clothes 🙁

Designers dream of being bought over by bigger brands

Lesser-known designers handle a lot of stuff. Not only they have to do two full collections a year, they also have to:

That’s why the designer in the book, whose brand turns $1-2 million in revenue a year, still get minimal profits. So they dream of being bought over – that way they will only be in charge of the creative process and let the bigger brands sort that out the ‘admin stuff’ for them.

This made me want to support smaller brands more, to be honest. The high price is a need, not due to greed.

Cabbage is ‘the stuff that falls off the back of a lorry.. out of factory gates.. and ends on the market stalls next to the cabbage, hence the name’, says the book. They are the leftover product (fabric, zipper, etc) that isn’t used in manufacturing the designer’s order.

For all intents and purposes, cabbage is the exact same thing as the real branded stuff, except they are way cheaper (if you know where to go) and don’t give you the actual experience of buying from the branded store.

Fake goods, on the other hand, tend to be poorly-stitched imitations of the real thing. Easy to spot.

I wouldn’t mind having a cabbage, if I can save that money 😛 (sorry, designers)

Keeping up appearances is everything

The designer in the book absolutely got shit-faced stressed out over the pressure of being ‘fashion-forward’. This can be translated in many ways.

They look at what other designers do, recycle fashion from 20-30 years ago, buy vintage stuff and simply slap their label on them, hire stylists (whose feedback include ‘I’m feeling it’ or ‘I’m not feeling it’), be different but not TOO different, and generally spend a lot of time partying (aka networking), drinking, smoking and snorting cocaine.

In short, looking like you made it is a necessity to make it in the fashion world.

Keeping up appearances is very, very expensive. Smaller design brands can’t afford it, and thus will never be ‘high fashion’.

Being put on the ‘waiting list’ can mean ‘The item is not actually available, and will never be’

In the book, the designer had a lucky break, and everyone wants to order the same dress a celebrity wore when she won an acting award.

The dress was custom-made. It was not available in stores, there was just one copy, and the actress is unlikely to return the dress. Making it would take months. It may not be cost-effective to make them, plus by the time the dress hit the stores the dress will no longer be in demand because fashion is fleeting like that.

So how do they cater to demand? Everyone who orders it gets on a permanent ‘waiting list’. I thought this was hilarious.

Apparently, the runways alternate between ‘lips’ and ‘eyes’ season. If one season is lips, then the next is eyes, and it rotates. I’ve just checked out the trends from London Fashion Week 2017, and apparently smudged lips is ‘in’, so the book is fairly accurate since 2016 is all about the brows (eyes).

What do you think about how the fashion industry makes money?

Personally, I think how the fashion industry makes money is cunningly brilliant. It’s not about practicality (which one may argue is the purpose of clothing in the first place), but about creating demand out of thin air, and subtly and not-so-subtly pressuring people like you and me to give in to that demand.

That said, I know that fashion can be art itself. I’m honestly in awe of people who can feel fabric and imagine 1001 possibilities. I can’t do that. Hats off to you, designers and people who are involved in this industry.

My takeaway from this book, when it comes to my personal fashion is simple: don’t buy in marketing and branding gimmicks. Go for quality, but know that quality is not synonymous with expensive.

But what do YOU think? Can exclusivity via pricing structure be justified? Let me know in comments!

I talk to my Dad sometimes about financial stuff. For fun, I asked what amount people my age should…

According to the PM, “the government is targeting to achieve 30 million international tourists and RM100 billion revenue in…

Disclaimer: I received a test unit for the purpose of this review. The unit will be returned. All the…

Is it just me, or do you also feel like other people have better lives than yours? Based on…