Have you ever thought of how ‘offence’ and ‘defence’ look like, within the personal finance context? Society at large likes to over glorify Offence moves because, well, it’s exciting.

Let me show you some examples:

Makes sense, right? If you’re lucky, your Offence will pay off. But if you’re not, well that’s what Defence is for.

Here’s one more Offence/Defence you should know: Thriving financial ecosystem which constantly shifts to adapt to new situations is solidly Offence. Protecting consumers in case any of the risk-taking activities didn’t pay off is Defence.

PIDM is the Defence for that particular situation.

Let me paint you a picture of what *might* happen if PIDM didn’t exist.

You are the typical, contributing member of society. You go to work, you pay your bills, you care for your family.

Like everyone else, you keep the majority of your money in banks because it’s safer and banks can be trusted. Millions of other Malaysians also use their services and plus they have been around for decades, their reputation is solid. You might even keep some of their stocks (directly through the stock market, or indirectly through mutual funds or unit trusts).

An unforeseen incident happens. The bank you’re using informs you that they’re very sorry for the inconvenience, but they’re closing down.

Oh no!, you think. But no matter. I’ll simply withdraw my money and put it elsewhere. Life doesn’t change, only my bank does.

Sorry, we don’t have your money, says the bank. We’ve gone bankrupt. We don’t have enough cash to give back. We’re truly sorry.

That can’t be, you say. You have my money! Give it back!

Any inconvenience is regretted, says the bank.

(This might be the point that you learned that yes, while the bank does keep all your deposits, they don’t simply keep the cash lying around. They lend it out to borrowers. They make investments. Your deposits exist in their records, but may not be available for all depositors to make immediate withdrawals at the same time. This is just how banking works.)

This alternate reality isn’t that far off from true reality. Banks can and have gone bankrupt. This long list compiles banks that were acquired or bankrupted in 2007-2009 alone, during the Great Recession.

When these banks failed, people felt very let down. They lined up in the streets to try to get back their money from bank branches. Bank employees lost their livelihood. In some cases, senior executives and ministers were prosecuted.

But we have PIDM in Malaysia. PIDM is exactly the defence mechanism that is in place *IF* a bank fails.

The financial consumer protection system is one of PIDM’s purposes, as mandated under Akta Perbadanan Insurans Deposit Malaysia (PIDM Act). They are the Government agency that is pure Defence in nature. As one of Malaysia’s financial safety net players alongside Bank Negara Malaysia and the Ministry of Finance, PIDM is part of the reason why Malaysia’s financial ecosystem is strong and stable.

What PIDM didn’t show you: The work that goes behind the scenes to ensure that PIDM is well-prepared to undertake a bank failure, no matter how remote it would seem right now.

(In this way, it’s similar to medical insurance. You take it, but not having to use it is the best case scenario) 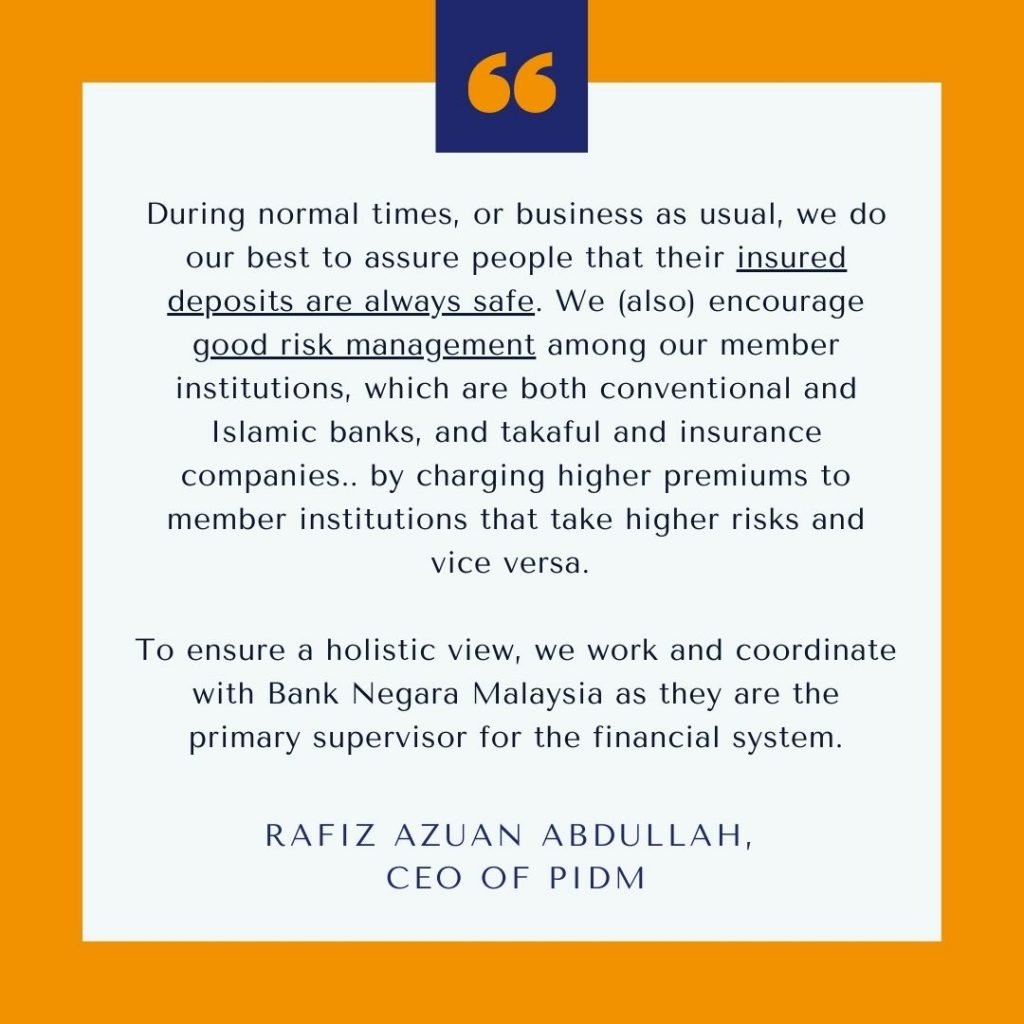 So What Exactly Will Happen IF a Bank Fails?

97% of depositors will get their money back in full, promptly.

The speed is important, and that is part of PIDM’s work. Their job is to ensure that you, the depositor, can go on with your banking activities with minimal disruptions.

With PIDM’s protection in place, your money will be refunded without the need to submit any claims; the process is automatic. According to the PIDM Act, PIDM is obligated to do this no longer than three months from the date of the winding-up order (But PIDM said they have the means to reimburse you much earlier than that. Just wait for official announcements from PIDM if the time comes.)

How about the remaining 3%, you ask? These are people who have more than RM250,000 in each applicable deposit account. They’ll be fine, don’t worry about them.

(Jk jk. They can file a claim to recover unprotected sums. But yes if this is a problem for you, please read this article outlining the scope of PIDM’s protection so you can optimise your finances for maximum PIDM protection.)

The grand total you need to pay for this amazing service? The huge sum of… free. No charge to you. PIDM member banks and insurance/takaful companies contribute to PIDM’s protection fund so if anyone tells you of any PIDM charge is a scammer (tell your parents/grandparents this, they might not know!). See some examples of posts/words/images used by scammers in PIDM’s Financial Consumer Alert page.

Going back to the Offence/Defence analogy. As I said, we as a society over glorify Offence a lot.

Sometimes it can be downright harmful – stories like ‘I used my credit card to start a new business and it worked out!’ or ‘I quit my job with no savings and it worked out’ is really bad IMO. For every one person who successfully ‘worked it out’, many others went bankrupt and had to sell their homes and cars.

So, if you haven’t, start thinking of Defence whenever you attempt an Offence. If whatever you’re attempting works out, good. If not, hey you’ll avoid the worst-case scenario.

As for PIDM – thank you for the Defence work. In the nicest way possible, I hope we never get to use whatever you planned, in case of a member bank failure. Amin.

Support a content creator, share this article :)As I sat down with Rafiz Azuan Abdullah, the CEO of PIDM…

Support a content creator, share this article :)Ah, credit cards. The enabler of reckless spending, yet such a useful…

Support a content creator, share this article :)Nowadays, I notice there are more personal finance websites and blogs around. My…

Support a content creator, share this article :)Let’s learn about critical illness insurance, that thing you said you want…