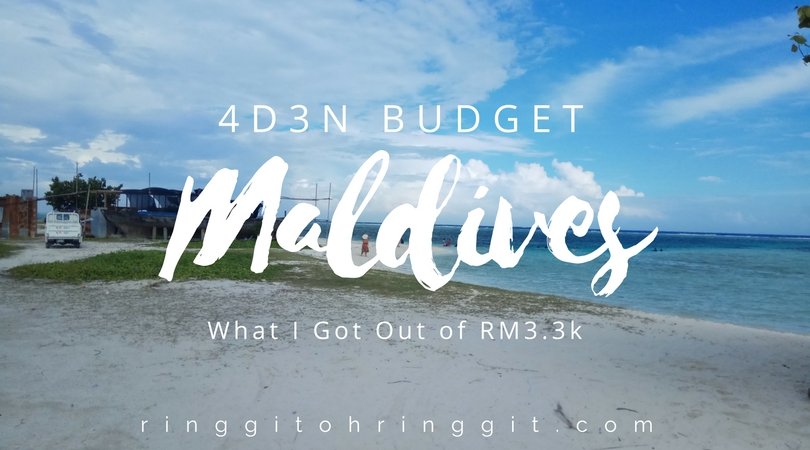 This is slightly mean, but one of the deciding factors for the Maldives trip is the fact that Maldives will be affected by climate change in the future. In my head, it was ‘oh, better go now in case I can’t later’. That’s how I justified the price tag of this trip, despite costing even higher than my Osaka + Kyoto trip.

However, the idea of seeing the most beautiful beaches I’m ever going to see in my lifetime was a big draw. I set up a very high expectation and was not disappointed at all. Islands in Maldives are absolutely gorgeous, beautiful, breathtaking.

I spent RM3.3k on this trip. Maldives generate almost all of their revenue from tourism – a ridiculous number like 90% or so – so I knew they’d charge me premium rates where they can, but I’d still consider this a successful budget trip. The accommodation cost was shared with a friend and deducted as such, but you can make a similar trip at around the same price point or even cheaper by:

If you get cheaper options, I dare say you’ll be able to get the same 4D3N Maldives trip for RM2.5k or so, per person.

Maldives is not a foodie location, at least not for Malaysians. The best meal I had was a hot bowl of dhal at a shop next to the bus stop, a random find. Seafood is not worth splurging at their price – better go Pulau Ketam or Sabah instead for all-out seafood blowout makan session. The fish dishes I had were deep fried (served with lime) and grilled (served with lime) and was not that flavourful. As for fish curries… we have better ones here in Malaysia. 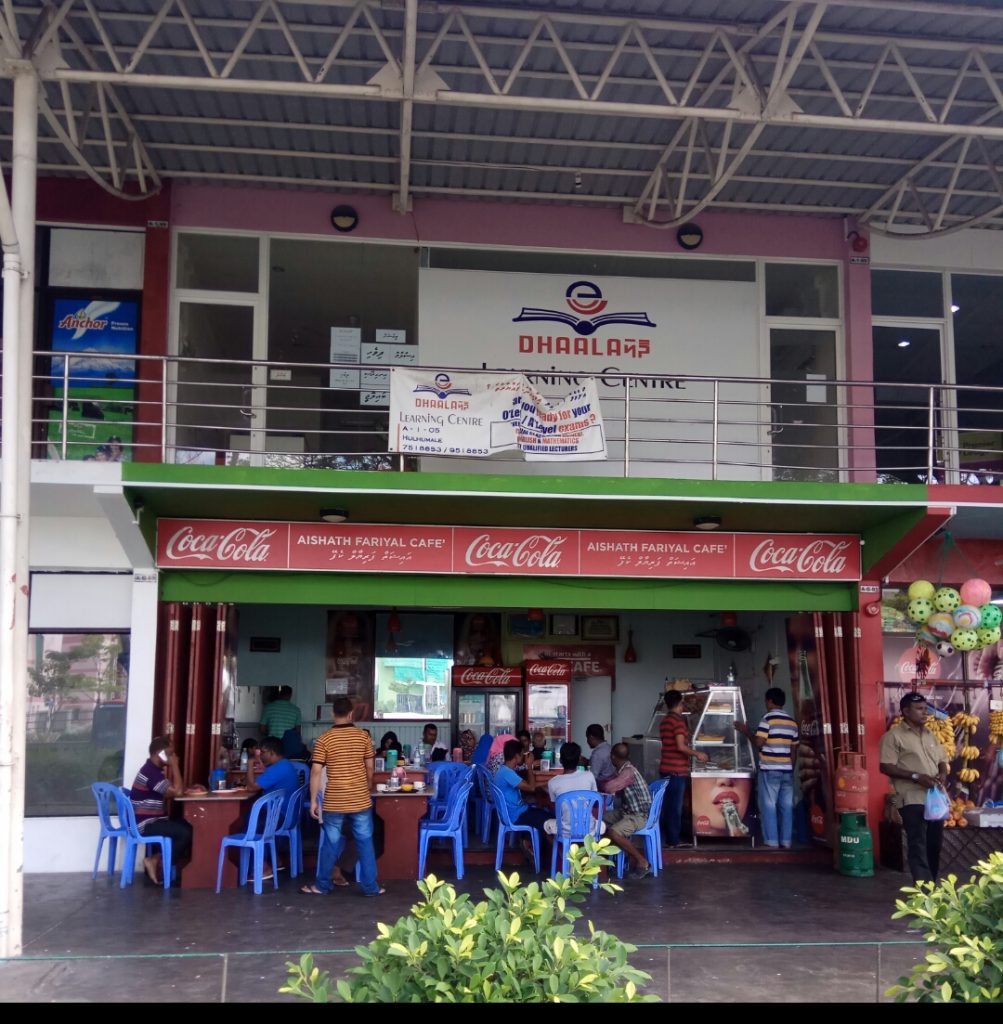 On choosing which islands to go to, it was either:

Maafushi is like super-small, less-packed version of Koh Samui/Koh Phangan/Koh Tao hybrid, except everything is halal (save for their Bikini Beach – where white people go to sunbathe). The beaches were beautiful, and from online research, the excursion trips from there are the most value for money. It’s a good hub for island-hopping. 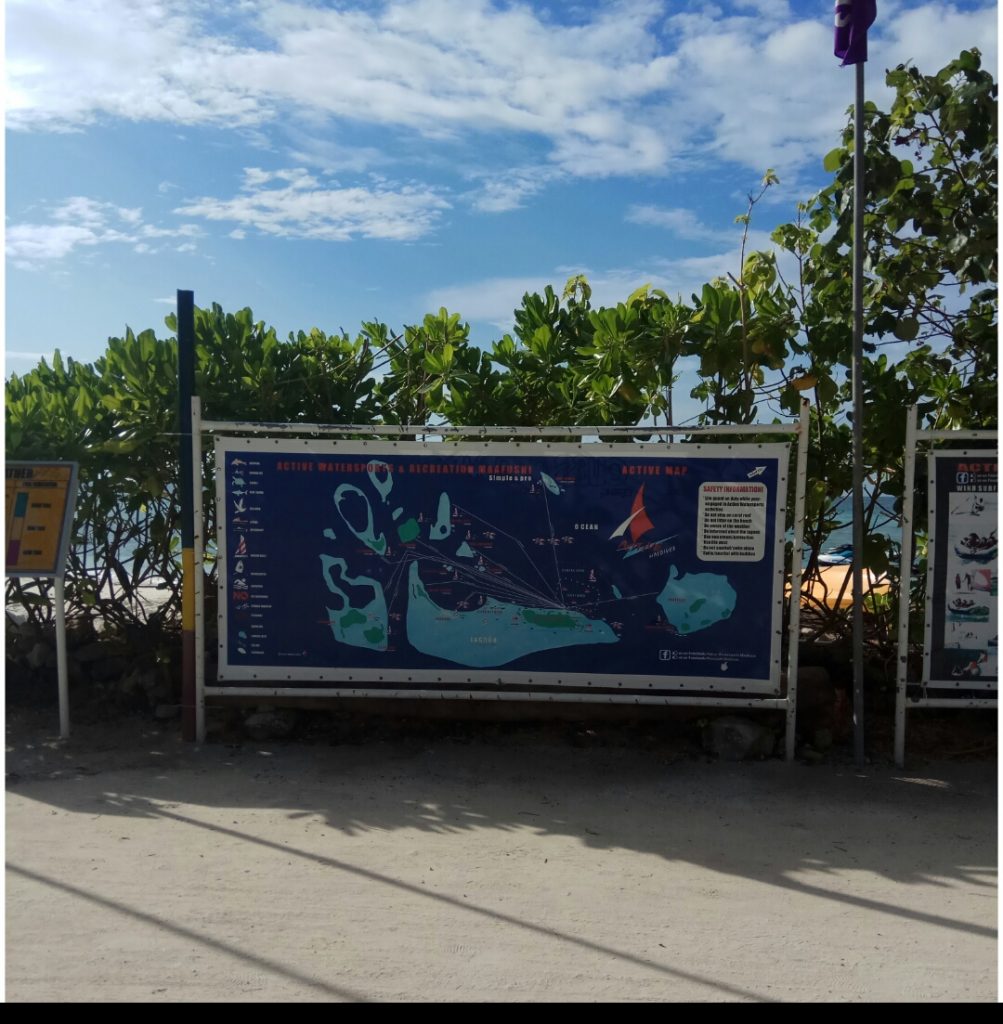 Savings tip 1: Get promo flight tickets from AirAsia if you can.

Savings tip 2:  I bought my flights and accommodation via Shopback (note: referral link) for the additional cashback. I think I earned back about RM100 or so, yay.

Savings tip 3: To save even more money, bring your own food and snacks. Even normal meals can cost a lot more than what we normally pay for here in Malaysia. The dhal place for breakfast costs us RM30 for two people, including drinks and some other local food. Bring Maggi or whatever and use your money for experiences instead, not food.

Honestly, Velana International Airport is like the main terminal hub, which is cool. You can go to most places in Maldives from there. It had the:

Upon arrival, I went to the Bank of Maldives money exchange to convert some of my USD into Rafiyya, their national currency. You can’t buy Rafiyya outside of Maldives. USD is widely accepted and legal tender, but for smaller purchases it’s better to pay with Rafiyya to get a better price. When I went, 1USD = RF15 = RM4.10. During my four days there, I exchanged USD150 but spent only USD45 or so in Rafiyya equivalent, mostly for food/drinks/public bus/public ferry purchases.

I arrived at Velana International Airport quite late, at 8pm their time, so I booked a room at Hulhumale’ to sleep overnight before going to Maafushi. Male’ is another viable overnight transit option – take the public ferry there for RF10-30 (IIRC) per way.

Savings tip 4: Don’t forget to change back your Rafiyya to USD before you leave Maldives! It’s almost impossible to exchange it outside of the country. Apparently you’re advised to keep your exchange slip when you want to exchange your Rafiyya back at the airport, but our teller didn’t ask. Wouldn’t hurt to hold on to it, just in case.

Savings tip 5: If you also arrive late and transit at Hulhumale, pick a hotel near the Main bus terminal in Hulhumale city (town? It’s small). The bus cost is just RF20 (USD1.33) per person and takes just 10 minutes. My hotel wanted USD20 per taxi ride, super expensive! Here’s the bus schedule, it runs 24 hours a day. The bus stop is near the ferry ticket counter at Velana International Airport. 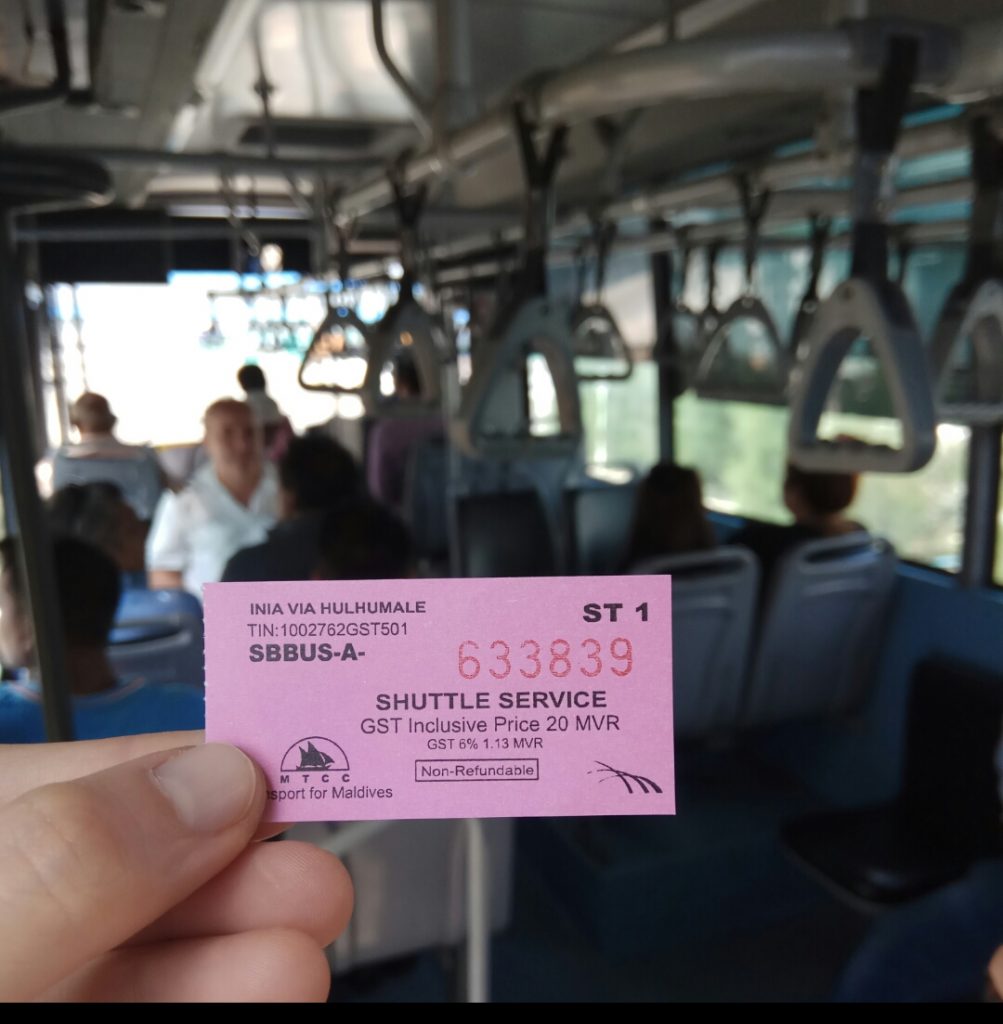 There wasn’t much to do at Hulhumale’. It’s still being developed, and won’t fully boom until at least 2020 or something. That said, the beach is beautiful and I like the building style at Beach Road. That’s worth a morning stroll.

We checked out, took the public bus back to the airport (RF20) and waited for the speedboat to Maafushi at 1.30pm. I booked it online from iCom Tours for USD25 per person per trip.

After our arrival at Maafushi, we checked in to a beautiful hotel room at Crystal Sands Beach Hotel. Friendly staff members, can recommend. I got the room for about RM500+ per night, during one of those Expedia sales. Again, use Shopback (note: referral link) for additional cashbacks 😀

The hotel, like many other hotels in Maafushi organises excursion trips. We booked two: sunset night fishing (USD25; 5pm-9.30pm for that night) and snorkelling trip (USD70; 8am-3pm for the next day). Because we didn’t have much time, we didn’t really price-compare other excursion trip packages by other tour companies/hotels, but it was definitely cheaper than what our hotel at Hulhumale’ offered. Much cheaper. Like almost half price kinda cheaper.

Night fishing was fun. I didn’t manage to catch anything except a couple of corals ahahaha. Views of the sunset, as well as the moon and stars come nightfall were amazing though. The group caught like 11 fishes or so (mostly small ones), and the hotel cooked them for us after we returned. Honest opinion: the group meal was kinda awkward and they only served us fried fish with lime, rice and coleslaw. I’d skip the meal and go elsewhere for dinner, but that was my experience.

Savings tip 6: To go to Maafushi for 90% cheaper, use the public ferry from Male’ – see here for more info. You have less timing options, but it’s cheap and only adds up 30 mins-1 hour or so to your schedule. If I transited in Male’ I would’ve considered this option. USD2 vs USD25 is a big difference.

Day 3 – Snorkelling in the sea!

When we checked in the day before, Maria the reception lady explained to us all the excursion packages the hotel offered. Aside from sunset night fishing and snorkelling trip, they also offered resort trips (USD110 per person), romantic dinner package (USD120 per couple), watersports package (forgot the price) and sunset sunbank photoshoot (also forgot the price).

By right, my $70 snorkelling trip should include:

But we didn’t get the dolphin cruise or the sandbank – no reasons were given. At this point I already made friends with the guides, so I (a sis by religion and all) didn’t complain. Seeing dolphins and the sandbank would have been cool, but oh well.

What I really liked though is that the guides were cool as heck and they took action pics of us as value-added service. Behold, the coolest photo of me that will ever exist! 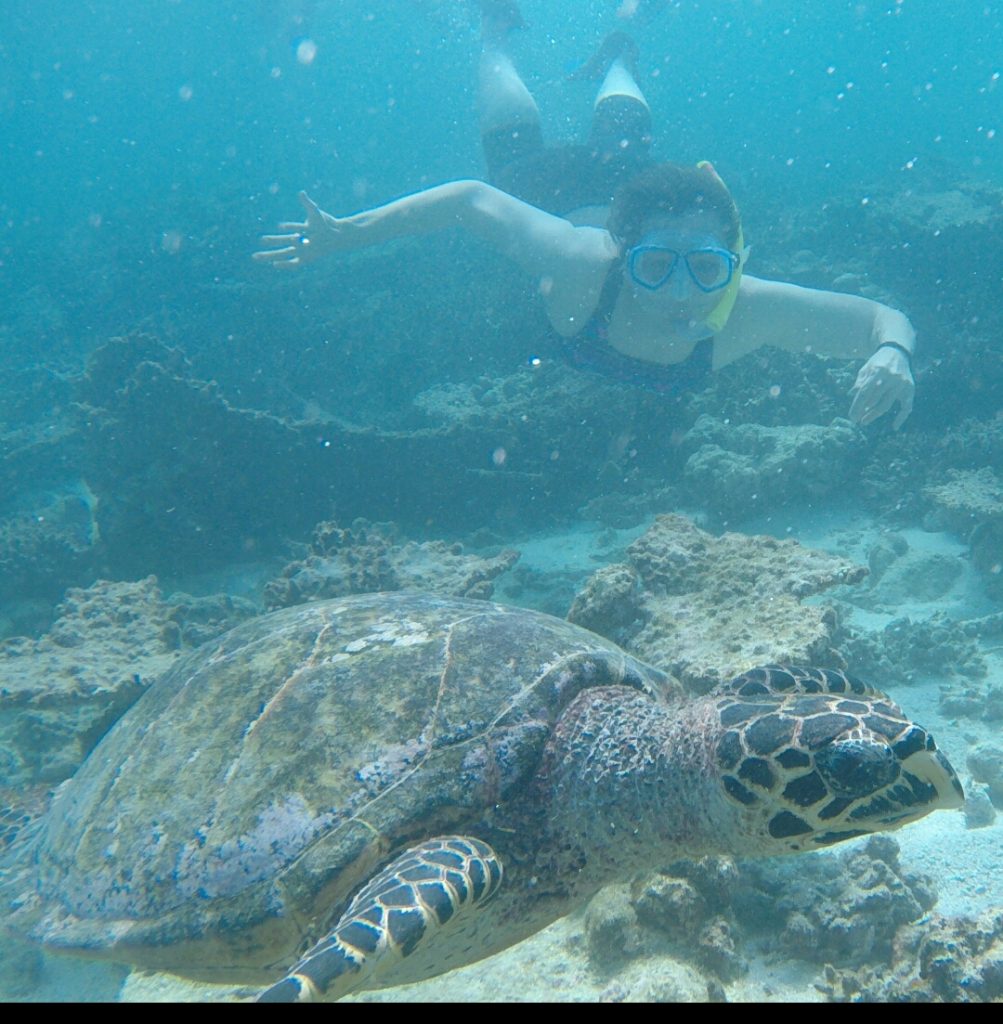 Snorkelling in the open sea was an experience to remember, although I am a bit sad at all the dead corals 🙁 It’s a trend everywhere around the globe. Not related to Maldives, but I remember snorkelling at the coast of Redang Island and saw colourful corals. This was 2010s, and when I went again a few months later, the corals were much dead-er.

During the snorkelling trips, we saw sharks, turtles, a big stingray, random fishes (not many), some squids and a couple of starfishes. I imagine if you go to the more upscale resorts, they can (maybe) bring you to better snorkelling locations with actual living corals.

Savings tip 7: We went in December 2017. It wasn’t peak season, although it wasn’t low season either. I saw forum postings of people who post excursion price lists prominently displayed all around the island but didn’t see them. Anyhow, our excursion trips probably weren’t the cheapest, but I’m happy anyway because the tour guides were awesome. Plus meals were included so I saved some money there.

Savings tip 8: If you plan to go on the snorkelling trips, you don’t have to bring your own snorkelling gear. They will supply them to you and include it in the price. In preparation, I bought a RM59 snorkelling kit from Decathlon and didn’t use it once. I heard that snorkelling rental costs USD10 or so per equipment and wanted to avoid that charge. In this case the plan backfired :/

Random tip 1: Apparently Maafushi has kick-ass new years eve parties, the one where its promoted mainly by word of mouth, a well-kept open secret. Kinda sad to miss it, but next time.

Random tip 2: Trips to other resorts are popular because they include unlimited alcoholic drinks as well as other amenities the resort has to offer, like house reef, buffet lunch and private beach. It will definitely cost more than USD100 per person, depending on which resort. If you wanted to try the ‘Maldivian resort’ holiday but on the cheap, it’s worth it. But if not, then skip the resorts.

Day 4 – Watersports, Male and back to airport

We have to check out by 12pm, but I was adamant on making the most of this Maldives trip and shopped around for watersports packages. They have many types: see below prices of excursion trips, diving and other watersports packages to use as benchmark. This one is by a company called Maafushi Dive and Maafushi Water Sports. Had to take the pics discreetly, thus why its senget a bit. Zoom in to view the prices better. 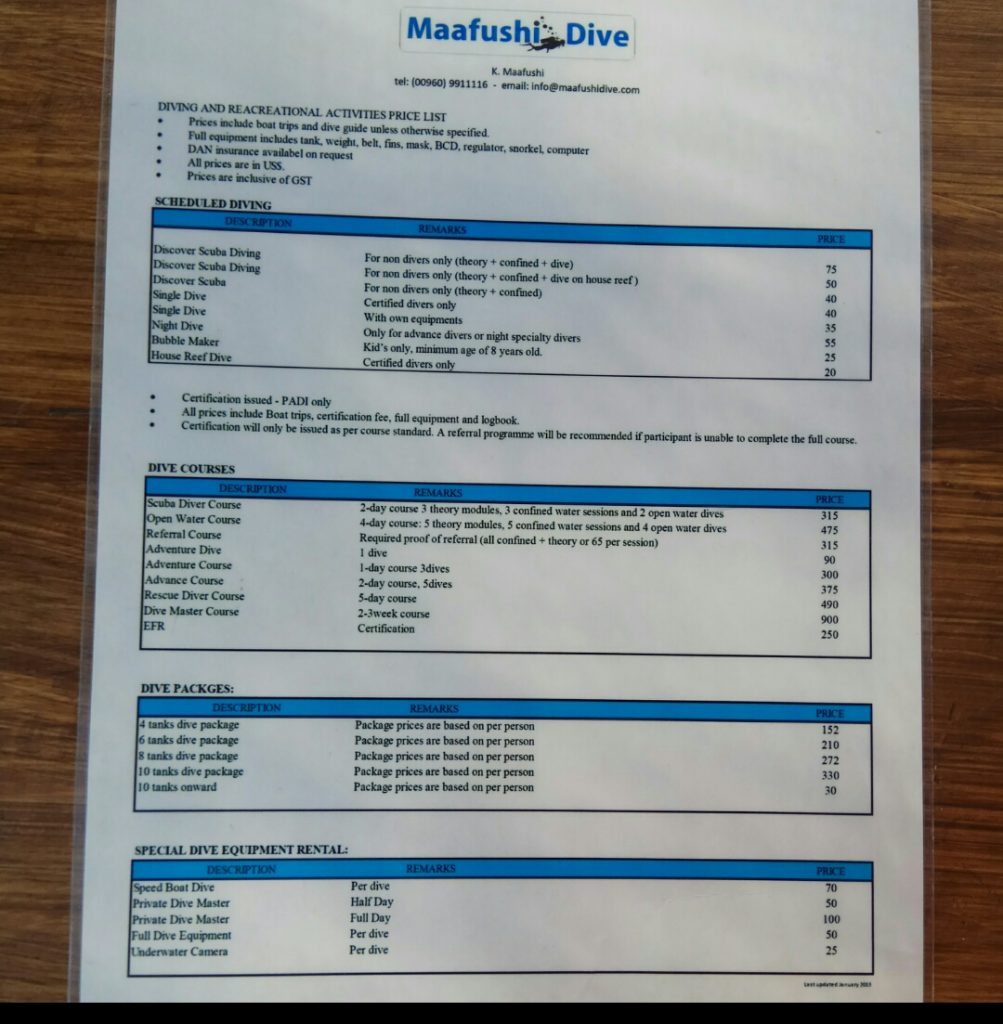 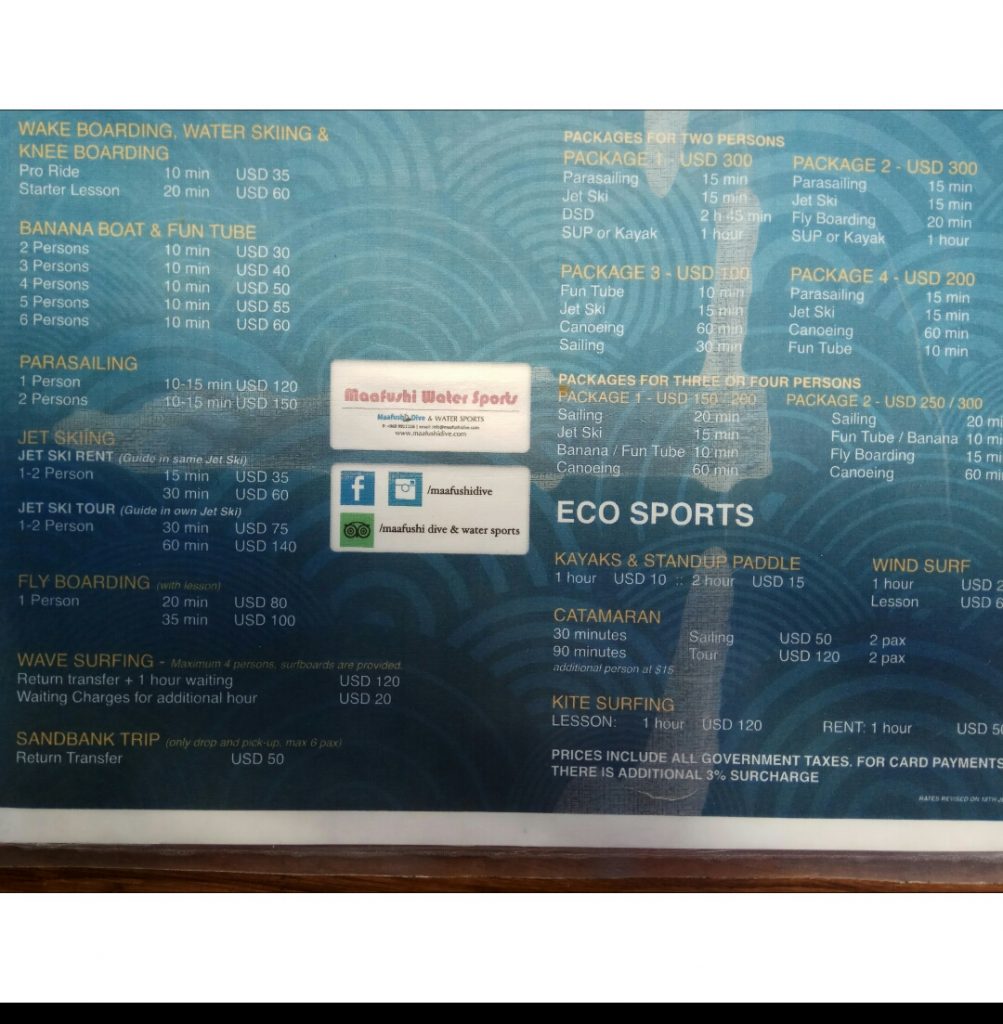 I wanted to try windsurfing, but the water condition wasn’t suitable for it (low tide). So I tried wakeboarding for USD60. Totally failed at it – I tore chunks of skin off my hands and kept falling in the water. But I’m glad I tried it, at least. The instructors probably felt sorry for me because they offered a free 5-min jet ski ride afterwards. The water was slightly choppy, so that was fun. 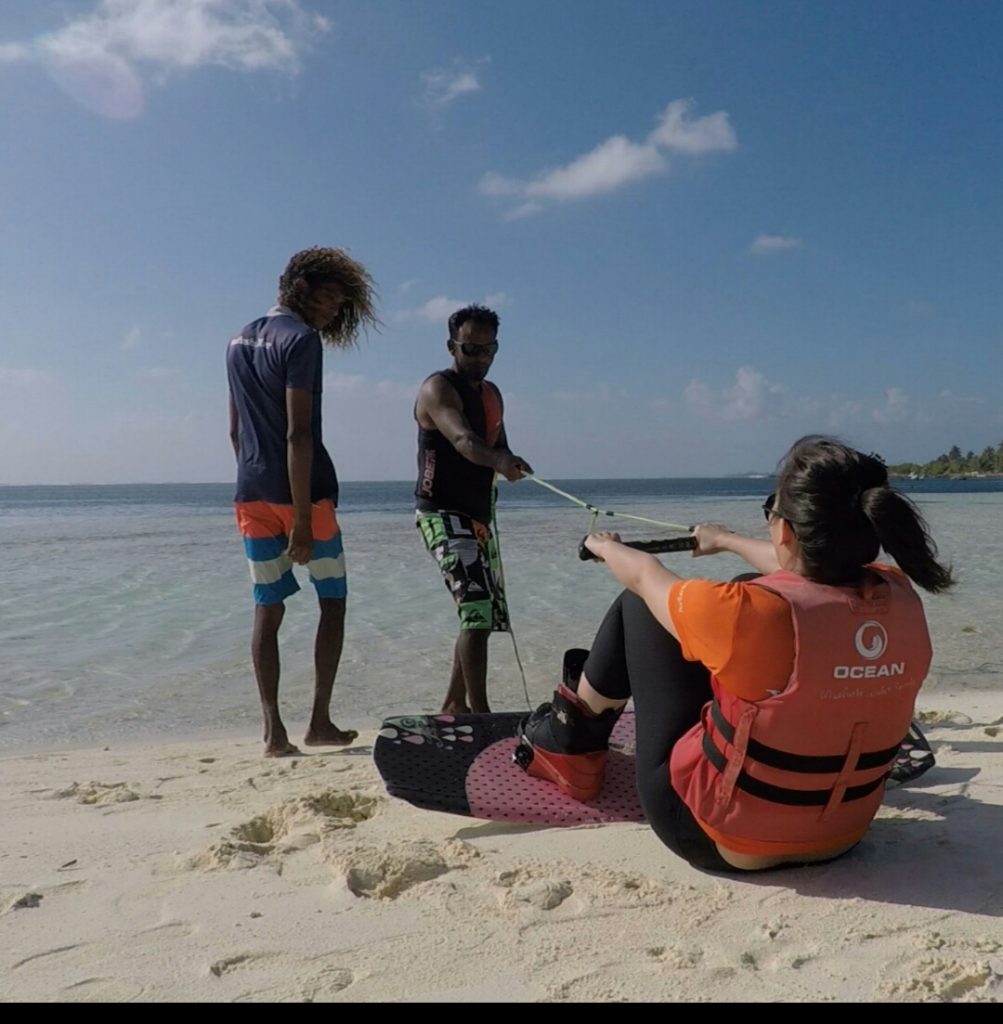 Do you have other info about the pricing for excursion and watersports pricing? If yes, share in the comments section!

After we showered and checked out of the hotel, we took the 12pm speedboat back to Velana International Airport. Instead of waiting there until our flight at 8.55pm, we decided to take the public ferry (RF10 per way) to Male’, the capital. Male’ was meh, to be honest. We had a meh late lunch, a meh stroll around and decided to go back to the airport early.

Savings tip 9: Check your balances after each purchase. It might have been an honest mistake, but the lady at public ferry counter charged me RF20 per trip instead of RF10. Not a huge amount to lose, but I’m kinda salty about it. 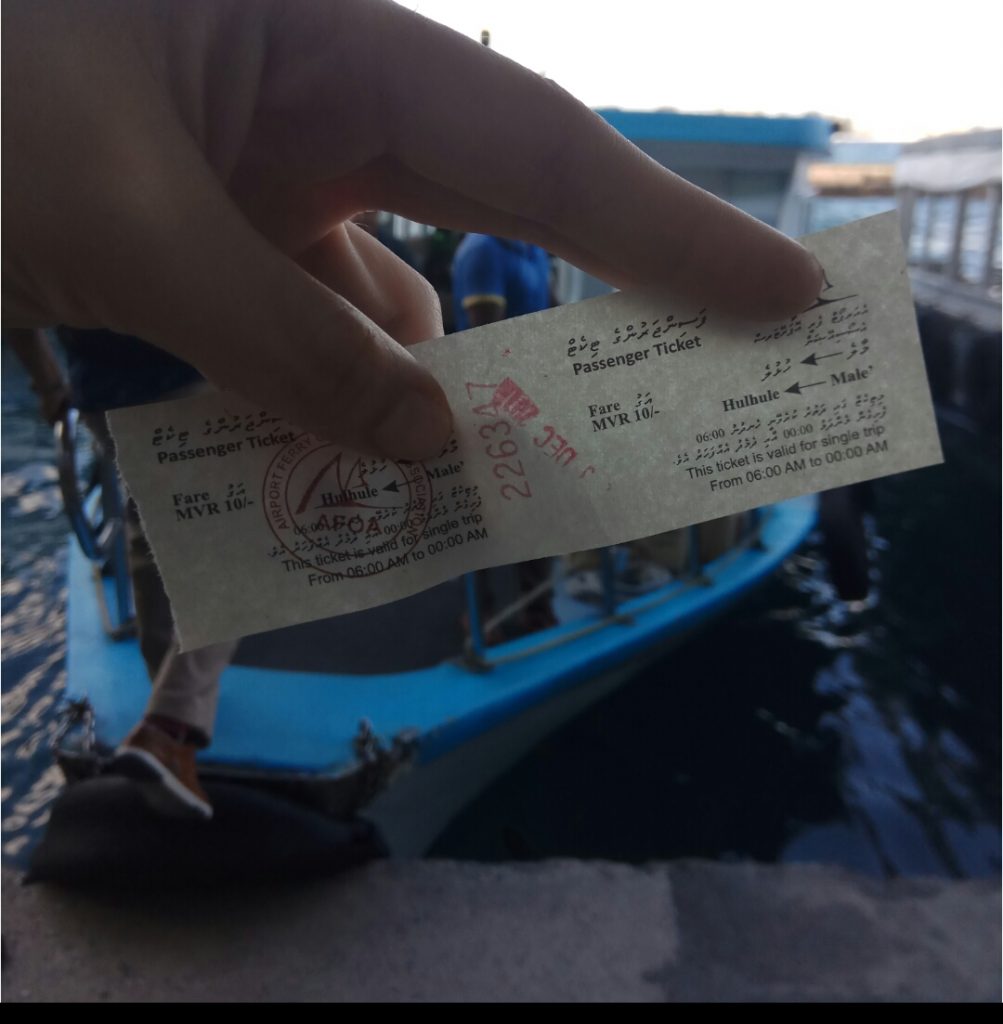 Total cost for my Maldives trip

In total, I spent RM3359.25 for this trip. You can make that even cheaper by getting cheaper flights, accommodation, bringing own food and opting for public transportation where you can. Breakdown of expenses in the table below.

Please share this if you find it useful, thanks!

The first time I did keto, I lost about 12kg. It’s the only diet that worked for me so…

I love that more people are talking about their monthly budgets! One of my favorite Malaysian PF (that’s personal…