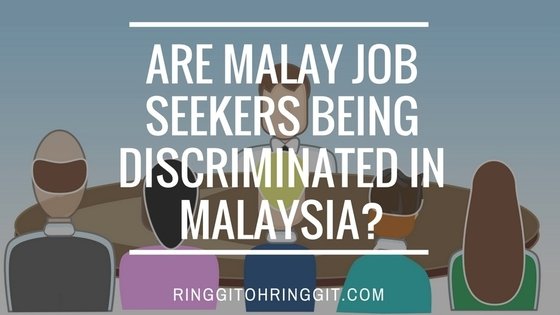 High number of unemployed graduates, especially Malay graduates are not news in this country. We hear them blaming everything but themselves. But what if the Malays are indeed being discriminated against?

Yeah right, I muttered at first, as someone who is sometimes ashamed by my own race (how could I not, when I’m assumed to be ‘easily swayed and confused’ half the time?). EDIT: I’ve since penned the Malay and Money: A Reflection article, taking ownership of my heritage

Trying to keep an open mind, I read this study, and was quite puzzled by the findings. It was entitled ‘Discrimination in high degrees: Race and graduate hiring in Malaysia‘ and was published in the Journal of Asia Pacific Economy by UM and UKM researchers. Here’s the paper abstract (bold is my own):

This paper investigates racial discrimination in hiring fresh degree graduates in Malaysia through a field experiment. We send fictitious Malay and Chinese resumes to job advertisements, then analyse differentials in callback for interview attributable to racial identity, while controlling for applicant characteristics, employer profile and job requirements.

We find that race matters much more than resume quality, with Malays, Malaysia’s majority group significantly less likely to be called for interview. Other factors, particularly language proficiency of employees, language requirements of jobs and profile of employers, influence employer biases.

Malay resumes tend to be perceived and prejudged adversely, and employers’ attitudes towards public policy outcomes, particularly pertaining to education quality and employment opportunity in the public sector, also account for the observed racial disparities.

Let me simplify that for you:

When researchers sent fake resumes of Malay and Chinese fresh graduates, the Malay applicants are much less likely to be called back for an interview. Employers perceive Malays negatively, think that they have lower-quality education and always have the safety net in the form of government jobs to fall back on.

Huh. I’ve never been pro-Malay, but I hate discrimination more. How was the research conducted to come to this conclusion?

How the research was conducted

As I read, it dawned to me the long-forgotten early struggles in my career, where I struggled to hear back from potential employers despite sending job applications after job applications. I thought it happened to everyone. I thought all job seekers faced the same problem.

Was it… caused by my (very Malay-sounding) name instead?

The research said that the data generated cannot give conclusive reasons. But some important points to highlight:

What does this mean?

For the longest time, I have thought, ‘Man, Malays are complainers’ when they say they can’t get jobs or get high pay or have limited opportunities. I thought: ‘The PM is Malay, the Parliament is majority Malay, the Kings are Malay, the policies are pro-Malay… what more do you want?’

There’s substantive proof now to back up this discrimination claim. 22.1% callback rate vs 4.2% callback rate is a big difference. 1 in 5 Chinese applicants get called for interview, while less than 1 in 20 Malay applicants get the same. Remember that the quality of resumes were already factored in.

This is only one research though, and I’m happy to be pointed to other studies to disprove this or question the methodology of this research (for example, I didn’t like that it only compared Malay and Chinese resumes). But until then, won’t you agree that discrimination is discrimination?

I hate the blame game, so I’m going to end this with a few suggestions on how can we level the playing field a bit more, so deserving Malay candidates get equal and fair chance in the job market, too.

Employers (of ALL races):

HXSM illustrated some stereotypes of Malay behaviour. We are often portrayed as intolerant, close-minded bunch. There’s a grain of truth in that, unfortunately.

This article was also published in Vulcan Post and The Financial Diet! In case you didn’t know, Tumblr has…

According to the Department of Statistics Malaysia, the T20 in this country received 46.2% of overall income share in…

I’m just 28, but the idea of retirement have fascinated me for a while. I still don’t know how…

Let’s face it: Malaysia is NOT a good place for LGBT individuals to freely express themselves. But no one…

I notice that these things happen to people who are good with money. Not saying I’m that great (OK…